Dahlias, the national flower of Mexico, are among the most popular flowers grown in American and European gardens.  Early breeders were interested in dahlia as a food source rather than for the insignificant blossoms.  The Dutch resumed breeding in 1872 following the development of the first fully double flower in the early 18th century.

Dahlia flowers are now available in a virtually unlimited range of colors, sizes, and flower styles. The American Dahlia Society recognizes nine flower size categories that range from over ten inches in diameter to the mignon single that is two inches or smaller, 18 flower form classifications and 15 different colors.  The bi- and tricolors are especially striking.  Presently the Royal Horticultural Society lists over 20,000 cultivars.

The strong hollow stems, deep green foliage and showy daisy-like flower heads make dahlia a desirable cut flower.  While the “dinner plate” size dahlias are particularly impressive, the best cut flower cultivars have medium-size flowers with many petals.  The relatively short vase life, seven to ten days, tends to limits sales but contributes to the success of dahlia in local and regional markets.

Cultivars from the dahlia Karma series, developed for field or greenhouse cut flower production, were used in a variety of tests from 2002 to 2004.  Karma dahlias are patented and propagation is illegal.  Our testing evaluated aspects of the field production and examined the optimum handling procedures to extend the postharvest life.

Plants of both cultivars that were planted April 2003 were cut backed at the end of the cutting season, well mulched and left in the field through the winter.  In April 2004 rooted liners of both cultivars were planted.  The year-old dahlias of ‘Naomi’ and ‘Thalia’ produced marketable stems beginning midsummer while the 2004 plants began producing marketable stems in September.

Field-harvested stems of ‘Naomi’ and ‘Thalia’ were subjected to a range of tests in 2003 and 2004.  The purpose of the tests was to determine ethylene sensitivity, optimum cold storage duration and the effects of commercial pretreatments and holding solutions.  Unless otherwise indicated fully expanded flowers were harvested.  After treatments, stems were placed at 68+4°F under approximately 200 ftc light for 12 hours a day.

Flowers were monitored daily to determine the end of the consumer life which occurred when browning on the petals was noticeable when looking directly at the flower head.  Pretreating with commercial hydration solutions did not affect vase life.  Commercial holding solutions such as Chrysal Professional 2 Processing Solution or Floralife Professional increased the vase life of both cultivars from 6-9 days for flowers in water to 10-11 days (Fig. 1).  Floral foam had no effect on vase life indicating that the flowers can be readily used in foam floral arrangements.
Figure 1. Effects of Chrysal Professional 2 Processing (CP2) or Floralife Professional (FLP) on vase life of dahlia ‘Thalia’.

The longest vase life was obtained when flower buds were cut at the breaking stage (one petal open) and 50% color.  The buds required 3.1 to 4.5 days to fully open and lasted a total of 12.1 to 12.8 days if placed in 2 or 4% sucrose or commercial holding solutions (Fig. 2).  Fully opened ‘Thalia’ flowers attained full size and color with this treatment.  However, many ‘Naomi’ stems cut at flower bud stage did not fully open or develop true color regardless of whether the stems were held in water (control), sucrose, or commercial holding solutions.

Figure 2. Effects of either Chrysal Professional 1 Processing (CP1) or 0, 2 or 4% sucrose on dahlia ‘Thalia’ stems cut as buds. 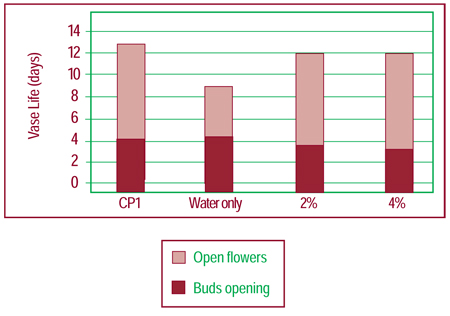 ‘Thalia’ stems could be cold-stored at 34°F for up to one week, but this reduced the vase life to 6.6 days as compared to 8.4 days for unstored flowers.  Storage of cut flower stems in commercial holding solutions, such as Chrysal Professional 2 Processing Solution or Floralife Professional, increased the vase life compared to storage in water or dry storage (Fig. 3).  Ethylene at 0.1 to 1.0 ppm had no effect on dahlia stems, indicating that they are not ethylene sensitive.  STS and 1-MCP had no effect on vase life. 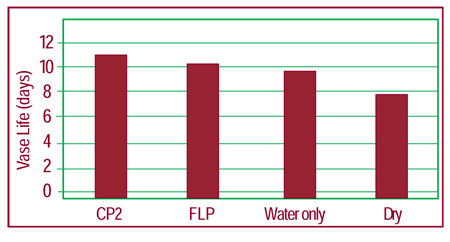 Dahlias require full sun and moist, organic soil that drains well.  Planting disease-free rooted cuttings or tubers each year and maintaining the best sanitation practices are necessary to avoid diseases.  Controlling thrips and aphids will help reduce spread of such diseases as tomato spotted wilt virus and prevent damage to foliage and flowers. Dahlias are subject to a number of other insects including grasshoppers, cucumber beetles, caterpillars, and leafhoppers.  A number of diseases including root and crown rot diseases and powdery mildew can occur.  Botrytis is always is an issue.

Cuttings or small tubers can be spaced at one to 1.5 plants/ft2 in 3-foot wide beds.  Larger clumps may need to be spaced further apart, up to 2 feet apart.  Plants can be fertilized with a dry fertilizer side-dressed after cuttings root out or after tubers produce shoots.  Fertilization can be delayed if the soil has been properly prepared with organic matter such as compost before planting.  Liquid fertilization can also be used, especially late in the season.  Support of some type is preferred for these large, heavy plants.  One to three layers of plastic mesh can be used; however, the plastic mesh may not be strong enough to hold up the plants.  An alternative is to encircle the bed with metal t-posts and form a cage with one or more layers of strong metal wire.  Flowers are more easily harvested from the cage system than from the plastic mesh but the bed must not be too wide or the plants may fall over within the cage.

In the United States dahlias are most commonly grown in the field, but the longest stems are harvested from greenhouse- or hoophouse-grown plants.  Planting instructions are the same in the greenhouse as in the field.  Since plant growth is not as heavy in the greenhouse, plastic mesh works well as a support.  Maintain a substrate pH of 6 to 7.  The optimum temperature for high-quality flowers is 50 to 59F, but plants can be grown at a higher night temperature of 62F for faster development.  Plants can tolerate temperatures as low as 40F, making them excellent candidates for extending the season with unheated hoophouse production.  Try to maintain a day temperature of at least 68F but less than 90F .
While research has proven that most dahlias flower best under short days, 12 to 14 hour days, there is a potential problem with providing short days.  In the greenhouse 11 to 12 hour short days may induce tuberization.  Therefore, dahlias should be given long-day lighting during the fall, winter and spring to prevent tuberization and promote flowering.  Growers often provide at least 14-hour long days.  Long-day lighting also tends to increase stem length.  Flowering should start 9 to 11 weeks after planting depending on the temperature.  The first flower is often short stemmed and surrounded by axillary shoots but later flowers will have longer, more easily harvestable stems.
Summary

In recent years dahlia breeders have produced cultivars specifically for cut flower production that appear to handle various climatic conditions and a broad spectrum of postharvest treatments.  However, this study explored a variety of postharvest tests on two cultivars and a limited number of observations on field production in one climatic zone.  Specialty cut flower growers from various parts of the country have reported success with many of the other Karma cultivars.  As with growing any new species or cultivar, growers should conduct their own “mini” tests covering both production and postharvest handling.  Climatic conditions vary from season to season impacting field production and postharvest performance.  The Karma dahlia series offfers specialty cut flowers growers new possibilities for a species that has been popular with the public for many years.  Since this study was completed, additional cultivars have been added to the series.

Thanks to the Fred C. Gloeckner Company for providing the rooted cuttings and to Beth Harden, Ingram McCall and Diane Mays for assisting with plant production and harvest.

John Dole is Professor and Head of the Department of Horticultural Science at North Carolina State University. Contact him at [email protected]