Dahlia flowers have a relatively short vase life of 5-7 days. In hopes of prolonging the vase life, Japanese researchers observed the effect of STS, 1-MCP and the cytokinin 6-benzylaminopurine (BA) on the vase life of cut dahlias. The best application method (dip or spray) for BA was also investigated. 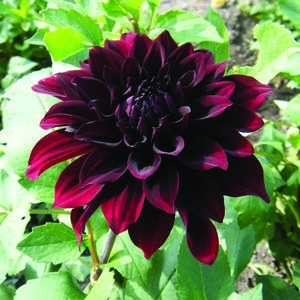 1-MCP, applied at a high rate of 2 µL/L, extended vase life of florets of ‘Kokucho’ by 1.6 days when the florets were held in distilled water. STS did not extend vase life of cut dahlia flowers. When BA was applied either to florets by dipping or to flowers by spraying, the vase life of dahlia was extended. Concentrations of 50, 100 and 500 µM were tested. The BA application method was modified to apply BA directly to petals by spraying instead of dipping them because a large amount of BA solution would be required for dipping whole dahlia flowers. In addition, BA dip treatment extended the vase life of florets 1.8 to 2.6 days, more than the vase life extension of the 1-MCP treatment. Therefore, BA may be effective in suppressing some factors other than ethylene involved in petal senescence.  In this study, the vase life of cut dahlia ‘Kamakura’ and ‘Michan ’flowers was also extended by BA spray treatments, as observed in cut ‘Kokucho’, suggesting that this method is likely to improve the quality of other cut dahlia cultivars.

Shimizu-Yumoto, H. and K Ichimura, 2013. Postharvest characteristics of cut dahlia flowers with a focus on ethylene and effectiveness of 6-benzylaminopurine treatments in extending vase life, Postharvest Biology and Technology, 479-486.

In Iris ‘Blue Magic’, visible tepal senescence symptoms start with slight loss of blue color, followed by inward rolling of the edge, 4 to 5 days after the beginning of flower opening. Petal or tepal senescence in many species is regulated by endogenous ethylene, but iris is among those species where such senescence appears to not be regulated by ethylene based on the effect (or, rather lack thereof) of exogenous ethylene. Other hormones may play a role, however.

This study investigated the effects of exogenous ABA, two auxins, a gibberellin, salicylic acid, several cytokinins, two jasmonates, and the existing inhibitors for each hormone class. Iris flowers were harvested in commercial greenhouses at commercial cutting stage and immediately placed in water. Stems were held in a climate-controlled room for vase life observations. Chemical treatments were applied at the onset of vase life experiments.

The study concluded that cytokinins and jasmonates delayed tepal senescence in cut iris flowers, while senescence was unaffected by ethylene, auxin, gibberellins or salicylic acid.

Methyl bromide fumigation for preplant control of a broad range of soilborne pathogens, weeds and nematodes continues to be eliminated due to its ozone-depleting nature. There are several chemical alternatives, but few of those are labeled for use in protected greenhouse structures as is often found in at least a portion of a cut flower operation. Steam treatment may be an effective methyl bromide alternative. This research evaluated the efficacy of various steam application techniques, specifically as a methyl bromide alternative in California coastal cut flower production.

Five trials were conducted in commercial flower operations including two open-field calla lily trials, two greenhouse oriental hybrid lily trials, and an open field sunflower/bupleurum trial. Steam was generated using a trailer-mounted boiler and delivered through a 3-inch-diameter hose until the soil temperature exceeded 158F at 10-inches deep. After 20 or 30 minutes (depending on the trial), the steam was discontinued and the soil allowed to cool naturally.

When treatment differences were observed, the steam treatments generally performed better than the untreated control and were comparable to methyl bromide treatment for weed control. Steam treatment reduced the pathogen populations of Phytophthora and Pythium in the sunflower/bupleurum trial, while no treatment differences were observed (even including the untreated control) for population levels of Fusarium. Steam treatment also seemed to produce a positive growth response in the spring oriental hybrid lily trial compared to the untreated control.
This study concluded that while steam injected below the surface generally performed well and resulted in pest control equivalent to methyl bromide use, reducing the labor and energy requirements of steam application would need to be accomplished before adoption by the industry.