This project was supported by the Association of Specialty Cut Flower Growers Research Foundation, the NCDA Specialty Crop Grant Program, and numerous suppliers. The authors would like to thank Diane Mays, Laura Daly, Benjamin Brindis, Blair Lane, Brigitte Crawford, and Iftikhar Ahmad for assisting with growing and harvesting the cut flowers.

As part of our yearly ASCFG cut flower trials, we conduct vase life studies on cultivars and varieties that show potential as future mainstays on growers’ lists. This year, thanks to a joint NCDA and USDA grant, we also had the opportunity to evaluate some cultivars that are already widely grown in North Carolina. A total of 38 annual and perennial cut flowers from 20 different genera were evaluated for postharvest vase life.

Trial varieties were planted sixteen plants per plot, four plots per variety. All marketable flowers were cut, measured, and recorded in the field three days per week. Up to 60 stems per variety were sorted into four uniform groups and bundled for postharvest vase life evaluation. 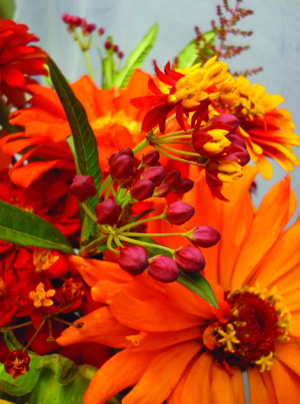 Bundles were placed into their first solution, hydrator (Floralife Hydraflor 100 Pretreatment at 1 ounce per gallon) or no hydrator (deionized water) for four hours. Then they were transferred to a second solution, holding solution (Floralife Professional Fresh Flower Food at 1.3 ounces per gallon) or no holding solution (deionized water) for 48 hours. Hydrators are intended to promote rapid water uptake and do not include sugar, while the holding solutions have sugar to promote long vase life.  The four resulting treatments were:

Once pretreatments were done, each stem was placed in its own mason jar with 300 mL of deionized water to simulate conditions in consumers’ homes. Temperature was kept steady at 68 ± 4° F with 200 fc light for twelve hours per day. Stems were checked daily and terminated once they reached an agreed-upon stage of expiration, usually when greater than 50 percent of petals were desiccated or heads bent over to less than a 90° angle. Vase life was recorded for all stems.

Agrostemma ‘Purple Queen’
‘Purple Queen,’ the most commonly grown agrostemma for cuts in North Carolina, produced an average vase life of 9.2 days when cut just after buds showed color (but before they opened). A hydrator plus a holding solution increased vase life by an average of two days over just water.

Amaranthus ‘Green Flowered’ and ‘Hot Biscuits’
Though these two amaranthus varieties are quite different, both fared comparably in postharvest evaluations. Pendulous, spring green ‘Green Flowered’ averaged 9.9 days and upright ‘Hot Biscuits’ clocked in at 10.6 days. Both lasted longer with a combination of hydrator and holding solution, which added an average of almost six days of vase life.

Ammi majus
The false Queen Anne’s lace we tested lasted an average of ten days in the vase. Using a holding solution added two days over untreated stems. This old favorite is a great standby as a frothy, lacy filler, but growers beware! The sap causes skin to become photosensitive and blister in the sun. Make Ammi the last thing you cut before coming in from the field to minimize sun on exposed skin.

Astilbe ‘August Light’ and ‘Bridal Veil’
Our first-year astilbes got off to a difficult start this year; Canada geese just couldn’t resist a taste of the succulent new leaves as they emerged from the soil, pulling up the plugs along the way. Needless to say, the bare-root plants were each planted several times before they could take root. Despite the circumstances, they bloomed quite well and we were able to obtain an average vase life of 6.2 days for ‘Bridal Veil’ and 5.9 days for ‘August Light.’ Although ‘Bridal Veil’ performed similarly across all treatments, ‘August Light’ lasted an average of 3 days longer with a holding treatment.

Celosia ‘Dark Rose,’ ‘Sunday Orange,’ and ‘Sunday Wine Red’
‘Dark Rose’ was the only comb-type celosia in vase life trials this year, and at an average of 16.5 days in the vase, it did not disappoint. Treatments did not show any advantage with ‘Dark Rose.’ The two ‘Sunday’ cultivars both lasted over 10.5 days and did better with a holding solution. Their flowers were terminated when more than 50% of the head was either blackened or wilted.

Cosmos ‘Double Click,’ ‘Sonata Mix,’ and ‘Versailles’
Cosmos were cut as soon as the bud began to open and before petals unfurled. ‘Double Click’s mix of frilly, sometimes variegated blossoms was a favorite among our growers. However, cosmos’ reputation of a short vase life holds true for ‘Double Click’ and ‘Versailles.’ Both lasted an average of only 5.3 and 5.8 days respectively. ‘Sonata Mix’ held on for a few more days and averaged 7.8 days in the vase. All three varieties performed best when a holding solution was used. 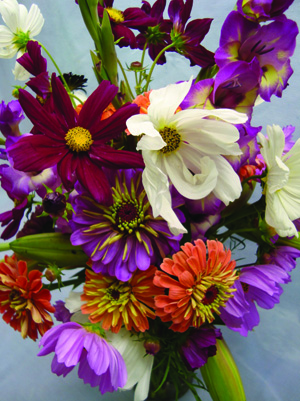 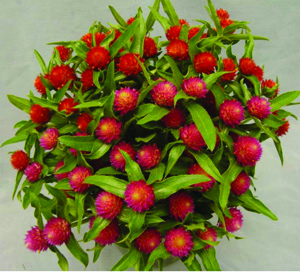 Gomphrena ‘Qis Carmine’ and ‘Qis Red’
The ‘Qis’ gomphrenas, with their long, slender, easy-to-strip stems and open growth habit, were this year’s marathon runners. There were a few stems that lasted over a month and still had not rooted out! Vase life of ‘Qis Carmine’ vase life was 19.3 days, while ‘Qis Red’ averaged 16.7 days. Stems were terminated when their necks bent to less than a 90° angle or the flower fell off. Both were unaffected by treatments.

Lily (Lilium) ‘Merostar’ and ‘Conca D’or’
Both lilies were field grown and suffered some abuse at the beaks of Canada geese. However, of the remaining plants, each lasted right at 13 days after harvesting. Stems were cut when buds began to ‘color up’, but were not yet open. ‘Conca D’or’ had three to four very large, heavy creamy butter yellow and white trumpets per stem. ‘Merostar’s stems were a bit more petite, with four to five smaller white and magenta flowers. Blooms were terminated when most petals were abscised. Interestingly both were unaffected by treatments, probably due to the fact that we used general floral preservatives.  In other tests we have done, lilies responded very well to flower foods specifically designed for lilies – keeping the foliage green and allowing the buds to open up.

Marigold (Tagetes) ‘African Jedi Orange’
‘African Jedi Orange’ was a bountiful bloomer with large, clear flowers that decreased in size over the season. Average vase life was just over 10.5 days, but use of a holding solution bumped the number to over 13 days. Flowers were terminated when they began to blacken in the centers.

Nigella ‘Miss Jekyll Blue’
Nigella is known for its dried pods for a reason. Almost as soon as we cut the flowers their beautiful sky blue petals shattered. The other buds in the spray still opened, so that helped extend vase life to 6.3 days. Performance was similar across all four treatments. ‘Miss Jekyll Blue’ harvested at pod stage from another experiment is still looking great four months later. The pods have distinctive purple stripes that stay true even after drying. 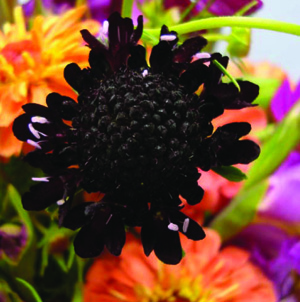 Scabiosa ‘Black Knight’ and ‘Olympia Mix’
Both Scabiosa ‘Black Knight’ and ‘Olympia Mix’ are highly favored for their richly-colored flowers atop long stems. They are not large-flowered scabiosas like the ‘Fama’ series, yet their impact on a bouquet is undeniable. We all agree that ‘Black Knight’s’ consistently deep, velvety, almost black pincushions are a lovely contrast beside almost any other selection from this year’s trials.  It fared well with an average 8-day vase life, and ‘Olympia Mix’ averaged 6.8 days. Blooms of the latter are slightly larger, with colors that range from white to the palest pink to lavender to a deep purple that rivals ‘Black Knight.’ Both cultivars lasted the longest with a holding solution.

Stock (Matthiola) ‘Carthago White’
‘Carthago White’ was the first cultivar in this year’s trials to bloom. It is a double-flowered stock, but a few plants turned out single as is expected. This stock’s vase life averaged 7.3 fragrant days. It performed similarly regardless of postharvest treatment and was terminated when more than 50% of flowers in the stalk desiccated.

Sunflower (Helianthus)
‘Goldy Double’ and ‘Sonja’
‘Goldy Double’ flower heads appeared after most single type sunflowers had already been harvested, atop nearly six-foot, sturdy stems. It is worth the wait for those large, fluffy golden orbs to begin to unfurl. First is the outer ring of flat petals reminiscent of a classic sunflower, followed by layer upon layer of serrated disc flowers. As these disc flowers open toward the center, the bright green disappears little by little until the entire flower head is one fuzzy, golden ball. On average, their vase life was 8.5 days. ‘Sonja’ is a miniature sunflower perfect for smaller arangements and bouquets. Its center is a deep, contrasting black. ‘Sonja’ lasted 9.4 days after harvest.  Both lasted the longest with a holding solution.

Yarrow (Achillea) ‘Fireland’ and ‘Strawberry Seduction’
We harvested both yarrows when pollen was visible, the recommended cutting stage for optimum vase life. Flowers were terminated at greater than 50% desiccated petals or wilted florets. ‘Fireland,’ with an average vase life of 6.9 days, had tall, straight stems and muted, rusty red flower heads perfect for fall arrangements. ‘Strawberry Seduction’ had shorter, but sturdier stems with showier crimson blooms. Its average vase life was 7.7 days. Both showed an average two-day increase in vase life with the use of a holding solution versus water. 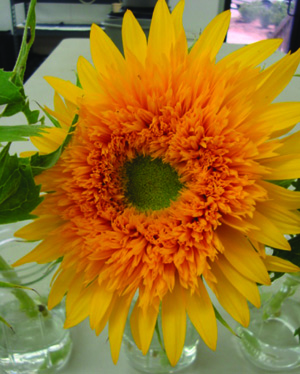 Zinnia ’Benary’s Giant Deep Red,’ ‘Blue Point Golden Yellow,’ ‘Blue Point Lilac,’ and ‘Blue Point Salmon Rose’
All four zinnias grown this year were large, double-flowered types. Flowers were harvested when disk flowers opened and terminated once more than 50% of ray petals shriveled or if the neck bent to less than a 90° angle. ‘Blue Point Golden Yellow’ outlasted the rest with an average vase life of 9 days, followed by ‘Blue Point Lilac’ with an 8-day run. At 7.6 days, ‘Blue Point Salmon Rose’ trailed closely behind and ‘Benary’s Giant Deep Red’ came in at 6.3 days. All four performed best when treated with a holding solution.