Cut flowers in the United States is a niche market for greenhouse growers, but some plants may provide some growers with the right opportunity to meet the needs of consumers clamoring for locally grown items. (See sidebar.) One such opportunity may come in the form of hoop-house-grown hydrangea. Here’s why: From about 1995 – 2010, the University of Kentucky had an active research program evaluating hydrangea production for cut flowers, which could be sustainable in the Ohio River Valley. When visiting production sites for Hydrangea macrophylla in Brooks, Ore., Nantucket Island or Varengeville-sur-Mer, France, one observes hydrangea growing at their best outside even though they’re outside their native Japan. The environment of the Ohio River valley, however, could not duplicate this growth.

STEP 1 in the research program at the three UK sites started by evaluating about 250 cultivars of H. arborescens, macrophylla, paniculata, and serrata in outdoor field production. Cultivars of H. arborescens and paniculata survived and produced normal production for cut flowers. With H. macrophylla and serrata, one of three things occurred: 1) plants were not hardy for zone 6 and died; 2) plants survived and produced excellent foliage but few if any flowers, 3) plants thrived with foliage and sufficient flowers.  The most flower productive H. macrophylla were the remontant cultivars.  The 250 cultivars included selections, which had originated as landscape plants or floriculture pot plants. 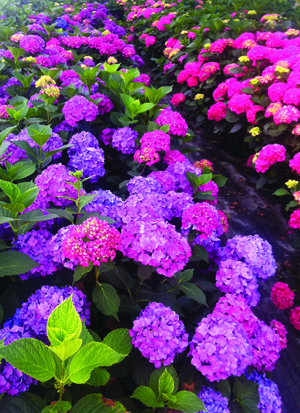 STEP 2 in the research was to evaluate plants in a container production system since both greenhouses and nurseries were producing these cultivars successfully for their respective customers. Plants were grown in No. 5 containers in unheated overwintering hoop structures with white poly in the winter and 55 percent shade in the summer. Still, there were mixed results in number of flowers produced with plants from landscape or floriculture origins. Flower buds are produced in late summer or early fall for the next season’s flower crop.  H. macrophylla non-acclimated flower buds appear to be injured around 28º F.  This is the limiting factor for success in step 2 above or with floriculture pot plants.

STEP 3 in the research was to place cultivars in overwintering hoop structures but grow them in the ground.  These were also covered with poly inside the house during the winter.  During June-July 2004, 288 plants representing various cultivars produced 7,000-plus flowers.

This was also the time that Highland Moor propogation nursery in Midway, Ky., entered the business world in 2002.  Half of Highland Moor’s business plan was to produce cut flowers. A 35-foot x 297-foot hoop structure (retrofitted from float bed tobacco production) became the primary cut flower production house. The house is covered with four-year opaque poly.  Ventilation is via rollup side walls and endwall openings. About 1,400 plants representing twelve H. macrophylla cultivars and 280 plants representing three H. paniculata cultivars are grown in No. 5 containers.

Fertilization is an 18-8-10 standard product and not the hydrangea mix. The hydrangea mix was initially used and it kept stem length shorter for plants being marketed for retail or landscape sales. For cut stem production, short stem length is not ideal, therefore, the standard fertilizer mix was used to achieve longer stems. Irrigation is with a spray stake rated at 2.5 gph and the application is three times per day for 3 minutes each during the hot summer months. Since plants are under poly and irrigation is at the container surface, no water touches the flowers while in production.

Pest control is a must

Spider mites and aphids have been the primary insect infestations. Beneficials have been used to control both. Since chemicals are not used we have a healthy praying mantis population in the house. Powdery mildew, phytophthora, etc. have been the disease problems and there are definite cultivar differences. All plants have been treated with biologicals.

Without aluminum in the substrate, H. macrophylla cultivars will be pink. Where blues or off colors are desired, aluminum sulfate has been applied. The application occurs three times during the year. The white flower cultivars of H. macrophylla or the flowers of H. paniculata do not respond to aluminum application.

Ninety to 100 days after new growth starts, flowers are saleable. For us, late February or early March is when buds break. Blooms are ready the last days of May or first days of June. Once spring was early enough for blooms to be available for Mother’s Day. The season ends in early November when an outside temperature drops to 25º F. The remontant cultivars H. m. ‘Oak Hill’ and ‘Decatur Blue’ are the first to produce blooms.

By July, these cultivars can be harvested in the green stage. Cultivars such as ‘Masja’ and ‘Red Star’ are only harvestable during June and July. No good second color is produced. In July, H. paniculata ‘Limelight’ and ‘Pinky Winky’ come into bloom as white or creamy white. With the remontant cultivars producing new lateral growth in June, they will be in bloom again in 90 to 100 days. Flowers on the second flush tend to be a little smaller than the first of summer flush as they are produced from mid-September until a freeze. Differing from what I have seen farther north, our H. p. ‘Limelight’ flowers start turning green in September and will hold the color until a freeze. I believe H. p. ‘Pinky Winky’ requires 50º F fall nights in order to develop their best fall red flower color. Both cultivars have value as fresh or dried cuts.

Our hydrangea cut flowers are sold in several different markets. Event Planners consume the greatest number of stems at any one time and their counts will vary from week to week. Florists tend to use a constant number from week to week. Internet sales are sporadic and our entry into this distribution system occurred because we had Highland Moor shipping boxes and Arrive Alive packaging. The fourth market is two large Farmer’s Markets where both cut stems of hydrangea and hydrangea vases are sold weekly from May to November.

H. macrophylla stem length can vary depending on how the designer uses it. Most stems are bundled in 14-inch plus lengths for event planners, florists and Internet sales. At times 8-plus-inch stems can be used by designers. For H. paniculata, small flowered stems can be in the 18 – 24-inch range. While the larger flowered stems are cut at 44-plus inches. All plants from both species produce some small flowers. These are cut at 6 inches and five stems are bunched and banded before placing in a vase for a Farmer’s Market product. The vases are small with wide bases and are purchased by the pallet.

End users in each market dictate what colors are sold annually. Articles have been written on hydrangea, with emphasis on techniques to produce uniformity of size and color (pink or blue) for the crop. Other than with an individual sale, uniformity does not exist with cut flower production. In one week there can be demand for light pink, medium pink, bright pink, light blue, medium blue, dark blue, blue-green, raspberry, lavender, peach, antique, etc.

The competition for a local hydrangea cut flower grower is the international trade and production from Europe, Africa, and South America. For a local designer, color is always important and the traditional wholesale industry has not been able to consistently bring the right or best color to the end user.

Breeders in Europe and U.S. have been creating some marvelous new remontant color combinations for hydrangea landscape use. Cut flowers growers should benefit from this.

Although greenhouse cut flower production dates back to the mid-1700’s, most cut flowers are imported from South American countries these days, particularly Colombia, where the climate is favorable and labor is cheap. In short, cut flowers are a niche market in the United States.

However, as a University of North Carolina Cooperative Extension  study (A Brief History of Specialty Cut Flowers) noted, “when one door closes, another opens.” Consumers, tired of the usual fare of imported cut flowers and supportive of the “locally grown” movement, have given greenhouse cut flower growers a little boost of late.

Today, consumers have a more varied assortment of cut flowers from which to choose. These include oriental lilies, hydrangea, and sunflowers, fresh-cut from the greenhouse and fields. These, according to the study, are grown in a “hodge podge” of structures ranging from heated greenhouses and minimally heated greenhouses, to unheated high tunnels, in addition to being field grown. Consumers can purchase these cut flowers directly from growers via farmers markets, roadside stands, and the occasional “u-pick-’em” operations.

There is also a push for more locally grown cut flowers, thanks to Debra Prinzing, author, floral designer, and champion of the “Slow Flowers” movement. — Neil Moran

Neil Moran is a horticulturist and freelance writer based in Sault Ste. Marie, Mich.

All photos courtesy of Robert E. McNiel This article was originally published in the February issue of Greenhouse Management, www.GreenhouseMag.com.

Robert E. McNiel is a retired professor with emeritus status from the University of Kentucky. He has been involved with the Hort Alliance Group and and assisted with the formation and function of Highland Moor propoagation nursery in Midway, Kentucky