Sue Cummings grew up in rural southern New Jersey across the road from her grandparents’ flower farm, established in 1970. Her father had to talk her mother into taking over the flower business (and moving it across the road to their horse farm) when she was a young adult. In 2009, when her father, Martin Baptist, was diagnosed with stage 4 lung cancer, Sue talked her husband, Jim, into becoming third-generation flower farmers. Sue, an only child, couldn’t bear to see all of her parents’ hard work waste away.

Jim and Sue lived in northeast Maryland, about an hour away. But over the course of two years they moved back to New Jersey to care for her father and the farm. Her father spent his last years training Jim and Sue in the ways of growing, maintaining and harvesting woody cuts. In 2010, after his passing, Jim and Sue took over full operation of Redwood Farms, a wholesale flower business. Because he had been slowing down, many of the plants had become overgrown and it took substantial time and money to refurbish the farm’s inventory. 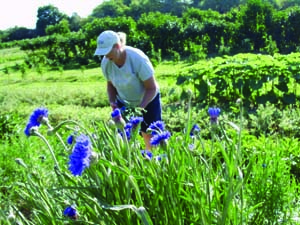 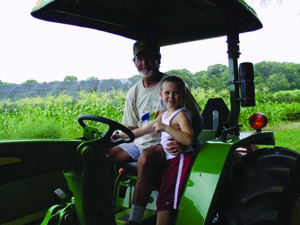 While Jim and Sue enjoyed gardening and took special pride in their home landscape, neither had any formal education in horticulture. Jim has a degree in philosophy and had a corporate career, and Sue has been a full-time school bus driver for 30 years, something she continues to do. Sue says, “In five years working on the farm, we’re already looking and planning ahead to our retirement crops; more woodies that will allow us to stay out of the field in the summer.” Right now, the 8-acre farm is one-third woodies, one-third peonies, and one-third annuals.

They utilize a field hoophouse, a greenhouse (that goes mostly unheated due to the cost), and four low tunnels. They spend January and February cutting pussy willow, fantail willow and curly willow. Lilacs, though a less dependable crop, usher in spring and by May, they are busy with the six-week peony season.

Lisianthus, a few other annuals, and hydrangea carry them through summer, and for the fall they grow deep jewel tone celosias and cut red twig dogwood. December had previously been a month of little to cut, but Jim found a new niche this past year, foraging plant material from the farm and creating “grave blankets”, 2 x 4’ evergreen sprays customarily laid on the grave of loved ones at Christmas.

The foray into grave blankets and an increased interest in annuals is due largely to a farmstand their daughter established last year in front of the farm. The stand, called Punky Turners, is located on a busy road with ample room for cars to pull in, and runs on the honor box system. Their daughter grows and sells vegetables, but they found that, even with a limited supply of annuals, the flowers always outsold the vegetables. In particular, bunches of sunflowers, mixed flower bouquets and mason jars of zinnias were fast and reliable sellers. Jim is the designer in the family, but Dianna, their oldest daughter, has started designing some bouquets under Jim’s tutorial. This year they have added at least 20 more annual varieties to improve the offerings at the farmstand. Sue says, “I got a season-long bouquet list from the Bulletin Board, from everyone’s favorite advisor, Joe Schmitt. I check the Board daily and have learned so much from the postings; such shared knowledge is priceless.”

Despite the recent retail venture with the farmstand, the Cummings consider Redwood Farms a wholesale flower farm. They market their stems to Delaware Valley Wholesale Florist, located only 20 minutes from the farm.

Peony is their primary crop. They grow 18 different varieties and marketed 23,000 stems last year. Sue’s mother was a meticulous recordkeeper, noting that 20 years ago peonies sold for $1 per stem. Today, Sue gets $1.10 per stem. While they were a premium earner for her parents, they’re just another part of the product mix today.

Sue acknowledges that selling to a wholesaler means accepting a slightly lower price, but she says, “The check always cashes, and I don’t have to spend time chasing the money.” They typically cut twice a week and deliver cut stems within 24 hours of harvest. She communicates with the product manager by phone, e-mail or text message, letting him know a week in advance what will be available. Jim and Sue usually deliver, but in cases of a large order, the wholesaler will send a truck.

Sue has observed, “The new color trend for peonies is definitely coral. They are the first to bloom here in zone 7 and the florists can’t wait to get them.” She says bulb and root suppliers also know this and wholesale prices have increased substantially. For the farm, that means expanding only by digging and dividing, a long and drawn-out process, but a tried and true method.

According to Sue, “Being so close to the ocean, humidity—and the subsequent disease pressure—is our number one enemy.” Soil health is on her “most important to learn about ‘to-do list’.” Every year, her understanding and management improves, but she says, “We deal with every mildew out there, starting as early as March.” White varieties take the biggest hit, including total crop failure of white peonies and white lilacs, in different years. She tries to be proactive and diligent with spraying of fungicides, realizing timing is key. To avoid getting a pesticide license, she uses as many OMRI-rated products as possible.

The lilacs were hit with phytophthora and it has taken three years to turn that around, but she’s hopeful for a good cut this year. Pruning has been another big learning curve, and obviously an important one with woody cuts. She says, “It seems every year we learn a little more and screw something up at the same time.”

Jim and Sue may not have envisioned themselves as cut flower growers, but they have reinvigorated the farm and have an enthusiasm for the future. Their dedication and success would surely have made her parents and grandparents proud.