Researchers in Pakistan evaluated the postharvest effects of zinc applied preharvest in gladiolus. Previous research has shown that zinc concentrations in biological systems is higher than other micronutrients. Zinc nutrition may play a role in a plant’s ability to cope with oxidative stress, one of the primary factors leading to early senescence in ethylene-insensitive cut flowers.

Potted Gladiolus hortulanus cv. “White Prosperity” were raised under greenhouse conditions. Zinc sulphate was applied at rates of 0, 2, 4, 6, 8 and 10 mg/kg.  It was noted that the soil had a starting zinc content of 0.85 mg/kg. Spikes were harvested at 2-3 open florets and placed in distilled water for vase life evaluation.

Plant growth was improved with zinc treatment compared to the control. The highest values for leaf area, spike length and fresh weight were achieved at a rate of 6 mg Zn/kg. The highest flower count and largest flower size was also observed at 6 mg/kg, while a treatment rate of 8 mg/kg brought about the earliest flowering. The percentage of opened florets and vase life duration were greatest at 6 and 8 mg Zn/kg. 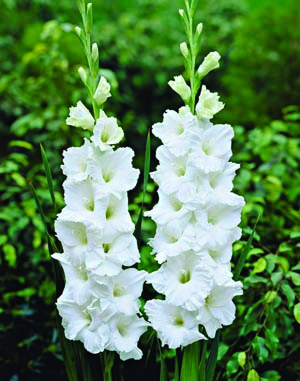 With symptoms of mild toxicity exhibited at 10 mg Zn/kg, the study suggests zinc applied to the growing media at a rate up to 6 mg/kg produce the best results with improved growth and quality. The extended vase life was attributed to enhanced biochemical attributes, membrane stability and increased antioxidative enzyme activity.

Gladiolus rust, Uromyces transversalis, is a pathogen of quarantine significance in the Unites States. In 2006, this disease was introduced in California and Florida. Detection of the fungus on two Florida farms resulted in mandatory and costly quarantine and eradication. The disease, which can result in total crop loss, has become endemic in several production areas in Mexico. This study, a collaborative effort between Mexico and the United States, was a preliminary investigation to determine the best fungicide active ingredients for disease management. Sixteen active ingredients were applied as individual products, as combinations of two products, and as rotations of different individual products or combinations.

All trials were conducted in commercial gladiolus fields naturally infected with U. transversalis. Fungicides were applied at the third-leaf stage and applications were made four times at 2-week intervals. The control was untreated.

All the products tested provided some level of rust management. Those that provided “very good to excellent” management included triazole, strobilurin and SDHI (succinate dehydrogenase inhibitor) fungicides. The most effective disease management was achieved by using combinations of a triazole fungicide with a strobilurin fungicide and rotating to a different product or combination of products.

Water and Nitrogen Needs of Gladiolus

While too much water for gladiolus may cause bulbs to rot and slower growth, insufficient water results in shorter stems, smaller flowers and tip burn. Researchers in Brazil evaluated irrigation management and optimal nitrogen fertilization of greenhouse-grown Gladiolus x grandiflorus L., ‘White Friendship’.

Irrigation treatments consisted of five levels of water replacement: 50%, 75%, 100%, 125% and 150%. For this experiment, the water tension equivalent to soil moisture at field capacity was defines as 6 kPa. Five nitrogen concentrations (from urea) were also evaluated: 0, 30, 60, 90 and 120 mg/dm3. The nitrogen doses were divided into three applications at 20, 31 and 40 days after planting.

The only reported significant response to nitrogen fertilization was for floral stem dry mass. Dry mass was almost 20% less in stems with no applied nitrogen compared to those receiving 120 mg/dm3.