Cooling efficiency in high tunnels is extremely important in crop yields. By maintaining cooler temperatures in high tunnels, watering is reduced and disease control is easier because the plants are less stressed. There are several options that you should examine when constructing your high tunnel or even upgrading an existing one.

Roll-up sides are the most basic form of cooling for ventilation in a high tunnel. Having about a 6-foot side wall with roll up sides is the key to ventilation. If you have a concern about rolling up sides and shocking the plants with cool air, there are two common options, which are gable shutters (discussed below) or a knee wall along the sides of the greenhouse. Some high tunnel growers install a 24-inch-high knee wall with either polycarbonate or woven poly film along the sides of the greenhouse rather than use a conventional base board. This helps eliminate the problem of the cooler air, but also helps keep critters out of the greenhouse if you have that problem. 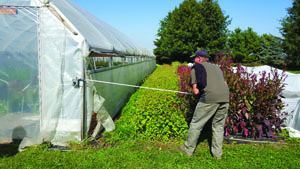 Roll-up sides are usually operated with a gear box kit. The gear box kit helps make it easy and safe to roll the sides up and down. Some people use a “T-handle” kit, which is simple and cheap, but it is not very safe, and is hard to operate on high tunnels longer than 48 feet. The last option is motorizing the roll-up sides. Motorized roll-up sides are run on tube motors and a controller. More and more people are realizing that this is a great investment because they no longer have to “babysit” their high tunnel because of this form of automation. As the sides roll up or down, there are incremental openings that help moderate the cooling effect.

One last note is that the roll-up sides are usually not inflated, because they just do not work very effectively when inflated. If you are concerned about heat loss, then we recommend purchasing a wind panel kit.

A wind panel kit is an extra layer of poly from the end bow to the first bow in the four corners of the greenhouse where the roll up sides are located. This extra buffer helps seal out wind when the sides are not rolled up, and helps reduces drafts from the four corners.Gable shutters (left) are becoming increasingly popular due to their simple benefits. Gable shutters can be motorized, which is preferable because they work on a thermostat or non-motorized. Having the gable shutters allows you to begin your first stage of ventilation without opening up the roll up sides. These gable shutters also allow any hot air to escape that may be caught up near the peak in the warmer summer months. In the cooler months, gable shutters are often left open at times to allow humidity to escape when doing winter growing.

Roof vents are the ultimate investment in cooling. Roof vents can be motorized and operate on a thermostat or be non-motorized and open and close with a chain wheel operator. The nice thing about roof vents is that they open incrementally whereas roll up sides are either open or closed if motorized. Roof vents can be very effective in cooling in the spring or fall when just the roof vent is open without the sides being rolled up. When you combine a roof vent with roll up sides, you can maintain temperatures within the greenhouse close to the outside temperature. This is especially important during the warmer months that can be unproductive if it is too hot. The feedback from growers is that roof vents increase yields about 20 percent over high tunnels with just roll-up sides. Although roof vents can be expensive with the vent, motor and controller, their payback can be very quick with the increased yields.

Shade cloth is used sometimes for the severe summer months but you have to be careful with light reduction. Some crops need all of the light that they can get while others will benefit from cooler temperatures with the sacrifice in light levels. Usually, the highest amount of shade cloth used ranges in percentage from 30 percent for high light crops to 50 percent for cold-tolerant crops. Just beware of your location and typical light levels. 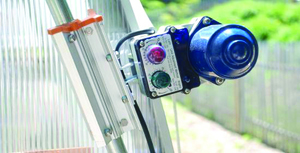 Doors are important features on high tunnels that can aid in cooling. Having a big door on each end wall does help get more air flow into the high tunnel. When you orient a high tunnel in your site, it is advisable to keep a side wall facing the direction of the summer prevailing winds. However, wind direction changes at times and having the option of opening up doors on your ends to facilitate air movement can be helpful.

Keep your plants comfortable in a high tunnel in the summer months. They will thank you later with increased crop yields and high profits.
Photo left: A tube motor on roll-up sides, the most basic form of cooling for ventilation in a high tunnel.