My Ode to the Marigold

A favorite of American gardens is in hot demand for Indian weddings and Mexican celebrations.

We have grown the large African style marigold for years and years; our fields would be incomplete without that huge swath of color slicing right down the field. We’ve seen them change names, become “improved,” larger, better, best color, most vigorous — they are still the quintessential, flamboyant, colorful big-head marigold which smells just so much like a marigold.

Every year we wait with anticipation for the first flush to come on sometime between the last week in June and the first week in July. It may seem strange that I should know that date so well; after all, we grow upwards of 150 species of cut flowers, but June is when we get our first enquiry for marigold heads to make celebration garlands.

Our local ashram welcomes the arrival of it spiritual teacher toward the end of June, always with festive garlands of marigolds, and a few days later it hosts a weeklong festival. Praying for the row of marigolds to bloom in time starts in earnest among the ashram’s disciples by mid June—will we be able to supply them with the first 500 marigold heads in time for the arrival of their guru?

From Weddings to The Day of the Dead

Marigolds are imported to the United States from Mexico and from India (can you imagine that kind of travel?) by the hundreds of thousands to satisfy the market needs of East Indian and Nepali weddings, of Mexican dance festivals, and of various prayer ceremonies. The residents of our Rogue Valley’s ashram love our marigolds because they can see the plants from the road, and because we give our flowers the organic treatment which this ashram simply calls love. The blooms look healthy and lively, good stuff to bring into a hallowed space.

Do we sell marigolds to flower shops? Well, we try to, but I probably sell fewer than a dozen 10-stem bunches in a year—marigolds smell, don’t you know. We do cut hundreds of stems three times a week for our market and supermarket mixed bouquets, with never a customer complaint.

Marigolds are a powerful flower and they “make” the bouquet. However, outweighing our growing marigolds for our own florists, markets and supermarkets, the demand from other parts of the country for marigold heads is astounding—a dozen phone calls per week at certain times of the growing season! We don’t ship flowers beyond the state of Oregon. As intermittent shippers we get no preferential price or breaks to ship, so the cost to the customer is huge and most often ridiculous— one hundred percent the cost of the flowers, if not more.

Every once in a while I succumb to an out-of-state plea for marigold heads and then I get to test this assertion, which is a mistake. In mid August last year I sent an 18-pound box of marigold heads to a gentleman in northern Washington State. He desperately wanted organic flowers for his prayer ceremony because, as he put it, he prays over them, he touches them, others touch them. It cost $199 for FedEx to deliver that box overnight, very close to the actual cost of the flowers. I kept the text message he sent me when the flowers arrived: “Received the flowers; thank you, they are absolutely beautiful!” That was comforting. 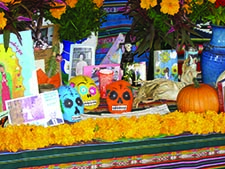 From July onwards I spend much time every week directing buyers to the ASCFG website to search for a grower in their state, in a neighboring state, in their corner of the United States. As a membership we don’t grow enough marigolds!!! I particularly encourage any of you flower growers living within any reasonable distance of an Indian, Nepali, or Mexican/Aztec community to include marigolds in your mix and let it be known in your area.

Marigolds are representative of the sun in Indian weddings, they symbolize brightness and positive energy for the couple, a divine blessing in the form of a living flower.

Look online for any business near or near-ish you that caters to Southeast Asian weddings, look at Pinterest, look at The Knot; Indians in particular go BIG with weddings! Some businesses catering to Indian weddings will buy thousands of marigold heads, by the pound in fact, and for the right price they will buy from you every week. Most import them, a shame when we could be supplying American grown.

These cultures are a really fun customer base; they have a lovely lilt to their voice, and always a story to tell.

Plan on a minimum of two rows, planted with a month in between. When the stems of the first row become weak and production slows down, your second row will have come into bloom, but you should take a hedge trimmer, big shears, hand clippers, whatever tool best suits the scale of your operation to cut back that first row. By autumn the first row will be back with a healthy, sturdy second flush.

Joan Thorndike is the owner of Le Mera Gardens, Ashland, Oregon.Contact her at [email protected]