Quince is a flowering shrub you think about only when it’s in its brief, early spring glory. Let’s take another look at its potential as a cut flower.

With its bright salmon, white, or orange-red flowers, flowering quince (Chaenomeles) is one of the first woody cuts to start the season. Depending on the cultivar, flowering can begin as early as Christmas and continue through March in some locations. Flowering quince is easily forced as well, further extending the season.

All species have their drawbacks, and flowering quince has its fair share. The early blooming makes quince susceptible to winter warm spells that can cause premature flowering, followed inevitably by a hard frost or freeze. In addition, plants often produce flowers and leaves simultaneously, and/or produce flowers on the older wood, necessitating the pruning of flowerless ends of the stems.

There is quite a bit of variability in growth habit across the cultivars, varying from upright to spreading to thicket-forming. Plants take three to four years to come into production, with two to three years needed to produce long stems.The most annoying characteristic may be the thorns, making the stems dangerous for customers and weeders. While a few cultivars have few or almost no thorns, such as ‘Falconet Charlet’, ‘Scarff’s Red’, ‘Cameo’, and ‘Texas Scarlet’, most cultivars are well armed. Breeders have been successful in reducing or eliminating this characteristic. A new series of cultivars, Storm, is thornless. It was bred Tom Ranney and his colleagues at North Carolina State University. 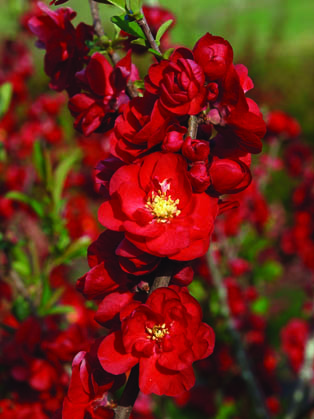 Three species are available: C. cathayensis, C. japonica, and C. speciosa, Generally, C. japonica does not work well for cut stem production, since it tends to grow out rather than up, reaching about 3 feet tall. C. cathayensis is a small tree with small white to pink flowers and more thorns than any sane cut flower grower will want to deal with.

Numerous cultivars exist for both C. speciosa, which can be upright or spreading in habit with showy flowers, and for C. xsuperba, a hybrid of C. speciosa and C. japonica, which tends to be shorter than C. speciosa but often has larger flowers. The Storm cultivars, C. speciosa, are not only thornless, but also fruitless and flower closer to the tips than other cultivars. Cultivars in the series include Double Take ‘Scarlet Storm’, ‘Pink Storm’, and ‘Orange Storm’; all have large, heavily-double flowers. 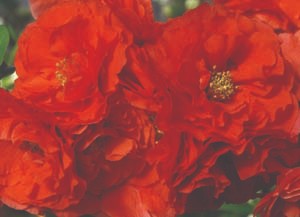 C. speciosa is hardy in Zones 4 to 8, grows 5 to 8 feet tall and about as wide, with a slow to medium growth rate. The Storm cultivars are hardy in Zones 5 to 8 and grow 3 to 6 feet tall. Place in full sun for best flowering. Plants are fairly adaptable to soils, although dryer soils are preferred and high pH causes yellow foliage. New foliage is bronze-red.C. xsuperba grows 4 to 6 feet tall, has spreading or upright branches, grows best in neutral or slightly alkaline soils, and is hardy to Zone 5.
As mentioned already, most cultivars have thorns, which present a problem during marketing but also with production.Plants tend to grow low to the ground, which makes it difficult to weed under them.

With the added problem of thorns on some cultivars, it makes it nearly impossible to weed, so consider using landscape fabric. Space plants 4 to 5 feet. Pruning depends on the cultivar, as some produce flowers on old wood, or both this year’s and last year’s wood. Flowers are borne on short lateral stems known as spurs. Young plants produce many leaves, but not many flowers. Spurs that develop on older wood then produce flowers. Older shrubs produce flowers on “young shoots at the end of that season’s growth” (Brown and Kirkham, 2004).

For production, very old wood should be pruned out. Dirr (1998) recommends coppicing to 6 inches to enhance flowering, although Brickell (1996) states that the entire plant should not be cut at once.
Flowering quince has no serious problems, although leaf spots, aphids, mites, and tent caterpillars can do some damage to the foliage and new growth.

Stems can be cut in tight bud with no color showing, or just as they are starting to open. Harvest occurs as early as Christmas and lasts through March. Stems cut in tight bud are often partially forced in a warm or cool greenhouse. The stems are placed in water, then given light and warmth (from 50 to 70F, depending on how quickly you want them to open) for a period of 2 to 5 days. Stems are then sold with flowers ¼ to ½ open. Forced flowers are usually paler than non-forced ones.

After stems are hydrated in water, they can be held dry at 33 to 35F for short periods. For longer periods, store in water. Stems can be shipped dry.

Vase life is normally 6 to 10 days. Individual flowers do not last long, but a stem full of flowers lasts a week.
Buyers look for long stems with lots of flowers and little or no foliage. The non-flowering stem tips can be removed or not, depending on buyer acceptance.

Although harvest can begin in as little as 3 years, plants really need 4 to 5 years to establish. Long stems are produced on 2- or 3-year-old wood.

John Dole is Professor and Head of the Department of Horticultural Science at North Carolina State University. Contact him at [email protected]

Lane Greer is a Lecturer in the Department of Botany at Oklahoma State University. Contact her at [email protected]