From Dominoes in Texas to Peonies in Illinois

Frank remembers the Texas farmers who served as his first mentors when he started out in horticulture, and finds similarities with the ASCFG today.

When I moved to Texas back in 1982, I’d never been south of the Mason-Dixon line or west of the Mississippi. I had sent an application for graduate school to Texas A&M, and promptly forgot about it. I was working as a lab tech at my alma mater Michigan State through the winter. That spring, Texas A&M called me out of the blue and said they were expecting me down there that fall. That was the first I’d heard of it!  I asked them what the funding looked like (Michigan was out of money back then) and they told me a characteristically Texan tale of new buildings, expanding departments, oil wells, and lots of funding. It sounded like they were lighting their cigars with hundred-dollar bills down there.

I agreed on the spot, bought an old truck, loaded up and headed south late that summer. I didn’t know a soul in Texas. It was 104 degrees the day I arrived. The last town I hit before College Station was called North Zulch, and as they say, “There weren’t nothin’ there.” I thought I was miles from nowhere. There was one small strip of restaurants and bookstores on the north side of campus, and a bar called the Dixie Chicken. There were four horses tied up to the porch railing outside the bar. No lie.

Feeling like Dorothy in Oz, I landed with a thud in the Pomology lab on the outskirts of campus. It was probably the best thing that ever happened to me. Running the lab was a Texan named Jim Kamas. His family was part of a sizable population of Czechs and Moravians that settled the hilly areas west of Houston generations ago. Many of them still spoke with a strong Czech accent. Jim instantly became a mentor to my education in horticulture and Texas culture.

Jim had a 20-acre peach orchard in Nelsonville, Texas, where his granddaddy still ran a general store. I would help in the orchard on the weekends, and learned to play dominoes in Tom Kamas’ store, where the old Czech ranchers would sit in the back and drink fifty-cent Shiner beers and play dominoes all night long. When they found out I was Hungarian, one of them smacked the table with his hand and said “That’s almost Czech!” and invited me to sit down and join them. That’s where I learned to be a Texan.

Through Jim, I got to meet some old-school Texas nurserymen. They were my inspiration and I considered them gurus. One man, Peter Guinn, ran a citrus tree nursery outside of McAllen. Jim and I slipped out one Saturday afternoon from the national ASHS horticulture meetings in McAllen and sat on buckets in the middle of Mr. Guinn’s trees and talked about life. Another man, George Madden, had a pecan nursery. He was almost blind, but he would run up the rows of his trees, showing me how to dis-bud the trees to force branches out at better angles. He couldn’t see the buds, but his fingers worked up and down those trees expertly.

Most memorable was a man named Vernon Wilson. He and his wife Ruby Jewel ran a fruit tree nursery about 30 miles east of Texas A&M. A group of us, all pomology students, would go out and see him on weekends. East Texas was like another planet to me. Mr. Wilson was a small, thin man, probably in his 80s and he always wore a khaki shirt, khaki trousers and a big pith helmet . He had thick glasses that magnified his eyes so that, together with the pith helmet, they gave him an animated look of an inquisitive explorer. He had been a nurseryman all his life and he knew plants like no one else. Ruby Jewel made the sweetest iced tea in East Texas, and would always have us in for a glass.

We would work with Mr. Wilson in his nursery, but soon he would get to talking and we would all stop and listen. I learned from Mr. Wilson that horticulture was really made up of three branches: horticultural science, philosophy, and religion. To Vernon Wilson they were inseparable. The same went for Mr. Guinn and Mr. Madden. They inspired me to eventually start my own nursery, and from that grew a thriving cut flower operation. I used to wonder sometimes if I would ever be good enough to be a real plantsman like these men.

Since those college days, I haven’t been able to get out much to meet growers such as those, but last May I got the chance to visit Hollingsworth Peonies in Maryville, Missouri. Don Hollingsworth is one of the best known and most successful peony breeders in the country.  As Ko Klaver says, “He is a walking, talking peony Wikipedia.”  I considered it a real privilege to get to meet him and see the nursery, so I took a side trip from my spring journey to our peony farm in Minnesota.

Don is in his 80s and has retired (sort of) but is still active in the business. Don has a long string of breeding successes, and many of his peonies are well known in the cut flower trade. ‘Command Performance’ and ‘Many Happy Returns’ are two well-known reds from Hollingsworth Peonies. But perhaps Don’s best-known peony is the beautiful intersectional (Itoh) hybrid ‘Garden Treasure’. Itoh hybrids are a cross between woody tree peonies and herbaceous peonies. They are very difficult to breed, but Don has a number of well-known Itoh cultivars to his name.

I got there just as the early peonies were starting to bloom. A huge white barn sits near the house where Don met me at the door. A young assistant named Zach was going over the morning’s crosses with Don, and a side room was filled with paper trays full of anthers and pollen. Don was busy with that morning’s breeding work, so Juergen Steininger showed me around the farm. Since Don retired, Hollingsworth Peonies is now part of Botanical Trading Company, a long-time supporter if the ASCFG. Juergen is the general manager of Hollingsworth Peonies and is working with Don in breeding new varieties. 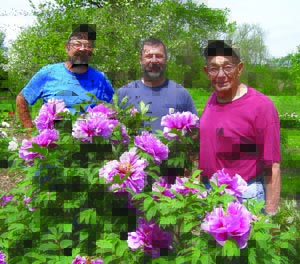 We started the tour in a stunning garden of tree peonies, all in full bloom. Juergen said it may be the largest collection of named tree peony varieties in the country. Many of them were numbered seedlings from Don’s breeding work, and many of the blooms were tagged with new crosses. Some of the flowers were at least a foot across.

We went out in the fields where I got an eyeful of their breeding stock, along with some beautiful new cultivars just being released. Many of the early types are single or semi-double varieties, but beautiful nonetheless.

A real standout was ‘Pink Bubbles’, new this year. It had deep, bubble-gum pink flowers on long, strong stems. Another early-flowered winner was ‘Dark Promise’.

It is a deep dark rose, fully double and very early. Juergen told me that one of the goals of Hollingsworth is to breed for early, fully double varieties. I asked about all the single and semi-double varieties they were using for breeding, and he explained how they used single varieties that were heterozygous for genes for doubleness to breed for doubles.  What that means is that although they are singles, they carry a recessive gene for doubleness, and when bred with other heterozygous single-flowered plants, the genes for doubleness will sometimes be expressed when both are combined in one plant. One of the challenges of breeding double peonies is that sometimes they are so double flowered that they may have no pollen or stigmas. The single blooms are fully functioning flowers, so they are able to produce pollen and set seed. 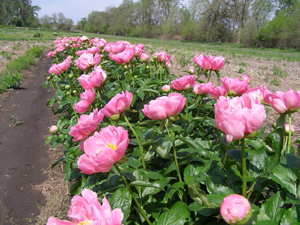 Hollingsworth Peonies is an online retail nursery, and some of these new varieties can run over 100 dollars apiece. I asked Juergen who the market was for these new varieties.  “Collectors,” he said. “We have a lot of customers in Russia.”Clearly there is a market for these new varieties. One of the new introductions, ‘Early Canary’, was already sold out at $120 a plant. Too bad—I want one! It is a beautiful, full double yellow. Maybe next year!
Later on I visited with Don in his tree peony garden. One of the interesting things he told me is that he thought there was more potential for raising peonies in the South, and that he knew of people who successfully raised peonies in Florida and southern California.  That got me thinking about our Texas farm, and the potential here. I also started looking at how many species of peonies come from warm or hot Mediterranean climates, and I’m getting excited about breeding peonies myself.

I got to thinking about my past mentors and gurus, and how the ASCFG plays that role for many of us. When I was first on the board back in 2000, I shared the job with growers such as Will Fulton, Ed Pincus, Bernadette Hammelman, Bob Wollam, and Ralph Cramer. A board meeting for me was like a session with many mentors. We now are establishing a formal mentoring program, but for years the ASCFG has been an informal network of mentors and mentees, where the mentor/mentee roles can change as quickly as the crop discussed; the expert of one crop is now the student of the next. You can’t put a value on the access to information we all give and receive as ASCFG members.

I also want to thank the incredible board members that we now have guiding the ASCFG. This is an amazing group of volunteers with boundless energy and a real passion for the organization. They are generous with their time and always thinking ahead. They work hard on the big concepts, and they roll up their sleeves and make the conferences and meetings a success. Thanks to all of you for your dedication to the ASCFG.

That said, you’ll be receiving an electronic ballot soon to vote on the next slate of board members.  As they say in Texas, “Vote early and vote often.”