2015 Winter – Getting to the Root of Dieback in Lisianthus

Lisianthus is an exquisite and delicate flower. The multi-million dollar pot plant and cut flower businesses that it supports globally attest that consumers all over the world are attracted to this beautiful flower. Transplants are equally delicate and produced by specialist nurseries, making this a high value crop, where yield and quality is critical to ensure profitability.

Gross margins can be tight if the establishment of lisianthus transplants is poor, or it is feasible to get only one flush from the planting. It is not unusual for transplants to succumb to what some growers refer to as “dieback” or damping off. These symptoms are usually caused by a fungal infection from soil-borne fungi such as fusarium, rhizoctonia, phytophthora, or pythium.  Plant death from these diseases can be as high as 70% if the conditions are conducive to the disease. So it is important to understand where the disease comes from, how it is spread, and what can be done to reduce the risks.

Prevent spread of diseases in water
Although these pathogens are all soil borne, only phytophthora and pythium have motile zoospores (a spore with a tail for swimming).This means that free water on the leaf surface, either from condensation or overhead irrigation, will provide the water needed for the fungal zoospore to swim and spread the disease. Lisianthus suffers from downy mildew that also has a motile zoospore.
Controlling leaf wetness by careful sub-irrigation, good drainage, adequate plant spacing, and environmental controls will contribute to the control of this group of diseases. Cultural control is essential because these diseases are systemic within the plant and chemical fungicides are not always effective. Although there are breeding programs in progress to develop resistant varieties, this is not a guarantee of freedom from disease, if cultural controls remain weak. 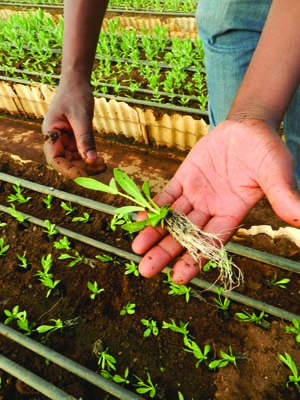 Excess irrigation, high soil organic matter, and dirty irrigation lines could lead to buildup of algae on the soil surface. Algae are the primary food source for two groups of tiny flies that inhabit the soil surface where spores of soil-borne fungal diseases are located. These flies are known to transmit the disease spores within the crop, so control of these flies will have a significant impact on disease control.

Shore flies (Scatella sp.) look like very small domestic flies, and although their larvae are not thought to actively feed on the plant roots, their role as disease vectors  makes them pests.  If present in high numbers, shore flies can be a nuisance to workers and their feces may cause unsightly marks on the leaves.

Fungus gnats or sciarid flies (Bradysia sp.) look like small mosquitoes and are both a vector for diseases, and cause direct plant damage when their larvae feed on roots and burrow into stems.

For such small insects, they lay a lot of eggs! Females live for about 10 days and each can lay several hundred eggs during their short lives. There can be many generations in a year-round growing environment. Eggs are laid near the soil surface and hatch into small maggots in the soil. Sciarid larvae (3 mm long) are translucent with a dark black head.

Sciarid flies will feed on the roots during this period, while shore flies feed on algae and organic matter. Within two weeks, the fully fed larvae will pupate in the soil and eventually another adult will emerge and the cycle begins again.

Fortunately, adult flies of both genera are attracted to yellow sticky traps. This will provide an indication of their presence, although no guidelines exist on the economic thresholds needed before action is taken.

Flies may not be uniformly distributed in a greenhouse. Put traps at soil level and focus on areas where there may be wetter soil conditions, like near irrigation valves. If the traps are the type where parts of the sticky area can be exposed gradually in sections (and the previous week’s sticky section is covered back up again), it is possible to record the rise and fall of adult fly populations. This at least will give the grower an indication of the effectiveness of any crop protection methods.

Generally, chemical pesticides target specific stages in the life cycle of a pest. In some countries, regular soil applications of diflubenzuron have been used to good effect. Over-reliance on one active ingredient is not recommended for reasons of resistance management.  Combined programmes with Bacillus thuringiensis var israelensis help manage resistance.

Biopesticides such as Metarhizium anisopliae ICIPE 69 can infect all stages of fungus gnat and shore fly. Metarhizium is an entomopathogenic (insect-killing) fungus which occurs naturally in the soil, and has been formulated into a biopesticide to be used as either a soil drench (for pupae and larvae) or as a spray against adult flies.  It is easy to use, as it can even be tank-mixed with insecticides or fungicides.
Real Metarhizium 69 is Registered in several African countries and is the product of research from the International Centre for Insect Physiology and Ecology (ICIPE).

The ideal crop protection solution is a cost-effective, prophylactic IPM program. Both the fungal diseases and the fly vectors need to be tackled at the same time.

Lisianthus growers in South Africa were facing severe losses from dieback until they implemented a preventative program which combined f Trichoderma asperellum, a fungus that controls soil diseases, with Metarhizium 69 as a soil drench for the fly vectors.

Before this treatment, it was not possible to produce more than one flush per planting; this IPM program has enabled the growers to harvest three flushes from one planting, making it a more profitable crop.