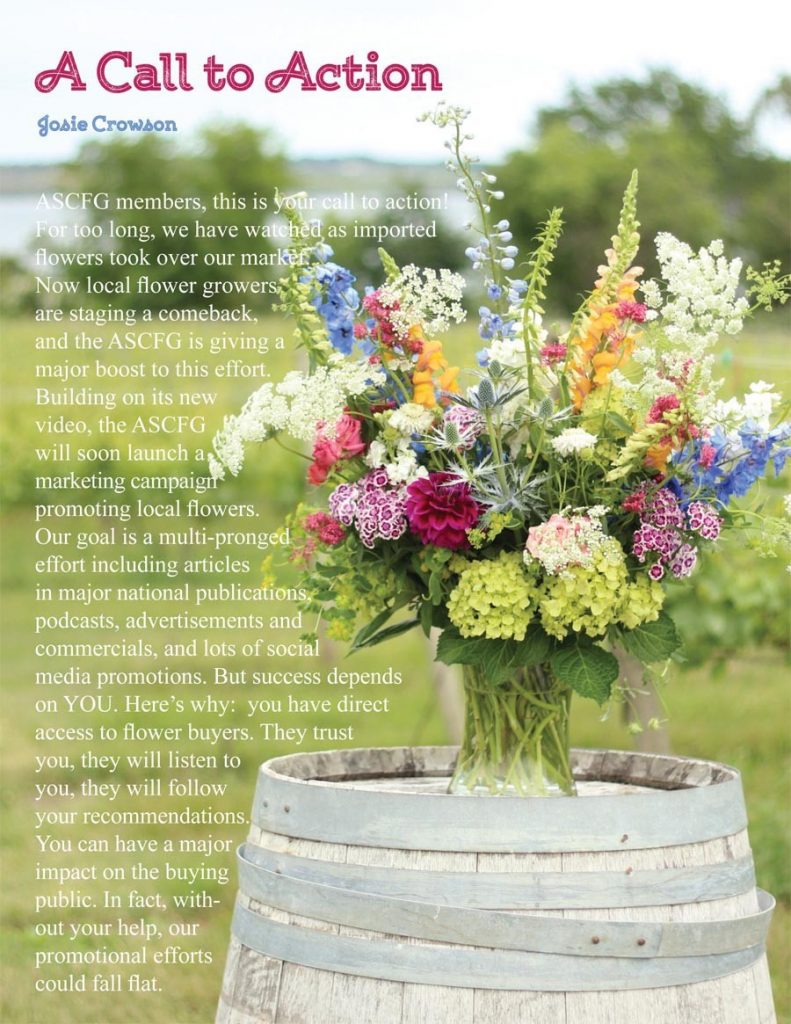 So what is the ASCFG asking you to do? Get the word out about the advantages of local flowers. Talk it up at your farmers’ market, with your wholesale customers, and with visitors to your farm. Most importantly, give presentations in your community about local flowers. Our new video—“Local Flowers, Local Farmers: A Growing American Movement”—is the perfect vehicle to get you started and make this easy.

You’re asked to give presentations all the time. Maybe you are uncomfortable onstage or feel you don’t have time to prepare, so you don’t do it too often. The video is a readymade feature that eloquently tells our story and using it makes your presentation easy. You can show the video and then follow with a talk about your own farm and your locally-grown flowers. Bring some sample flowers or bouquets to give away, or show pictures if it is not flower season. It’s actually an easy sell. Flower buyers hear more every day about the advantages of local flowers, so they are primed to respond well.

You have watched the video, right? If not, don’t wait another minute—view it on YouTube right now. https://youtu.be/PEXs9UUgqqg

Here’s an example of what we did to get the word out. Jessica Hall (Harmony Hill Farm), Gwynn Hamilton (Stonecrop Farms), and I gave a presentation on local flowers at the Virginia Master Gardener College in June. Jessica brought three gorgeous bouquets from her farm; I brought a bouquet (definitely not locally grown) from my local grocery. I started the conversation by talking about the grocery store bouquet, pointing out that although the flowers looked pretty, the bouquet lacked variety and uniqueness, not to mention fragrance. It looked like every other grocery store bouquet. The contrast with Jessica’s fresh bouquets was striking. The grocery store bouquet was unlabeled as to origin, and I noted that it was likely imported, as are 80 percent of the flowers sold in the U. S.  After touching on the film’s major points (always best to give the audience a heads-up about what’s coming), we showed the video.

Afterward, Jessica and Gwynn each gave terrific talks about their farms—their specific challenges, business models, what they grow, etc. Their passion showed through and the audience responded with lots of questions for these two talented women. We finished with a drawing for the bouquets—Jessica’s three beauties and the grocery store bouquet. Jessica’s bouquets went first, of course. The last “winner” reluctantly took the grocery bouquet.

I think our presentation made a real impact on those attending and, in my opinion, that was largely because we had both the video and local farmers in person. The video alone is good, but its impact is greatly magnified when you have real farmers there to emphasize its message and make it personal.

Another presentation here in Fredericksburg on October 2 will have a slightly different twist. Following the video, Barbara Lamborne will discuss her farm (Greenstone Fields) and Kathy Wirtala (Virginia Flora) will use Barbara’s flowers in a floral demonstration. 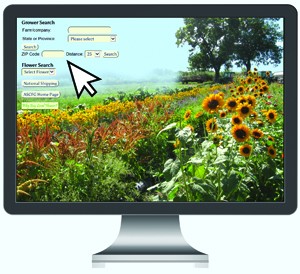 This event, held at a lovely local facility, is free and open to the general public, so we are hoping for a good turnout. The point is that you have lots of options for designing your presentation.

Getting Started: Dealing with the Details

Don’t wait to be asked. Your job is to get the word out! Offer to give presentations to these groups. Most clubs and other organizations are constantly on the hunt for interesting presentations.

You can show the video either from your computer directly or from a DVD. The ASCFG office has a large supply of DVDs and will provide one for any member who is doing presentations.

Audiences always ask where they can find local flowers. If you are a grower, then obviously you are a good source. But let your audience know that they can do a zip code lookup for local flowers on the ASCFG website now. This is a new feature that ASCFG recently installed.

Judy and Linda will gladly send you handouts, such as “Why Buy Local Flowers” and “Help Us Spread the Word About Local Flowers” to help with these presentations.  Emphasize especially the points in the “Spread the Word” flyer. Encourage your audience to request local flowers from their grocer or florist. Your audience will respond—people like being called to action for a good cause. After I gave a presentation to my local garden group, some members went right out and told the grocer they wanted local flowers in the store. You can get people fired up! Even better, if we can get members of our audience to give presentations, our impact multiplies many times over. Master gardeners have an incentive because they can get volunteer credit hours for giving such presentations. Master Gardener groups, women’s clubs and garden clubs are always looking for new program ideas—here is one readymade for them.  The ASCFG is able to supply DVDs that they can use for these presentations.

Don’t forget the shorter video about the ASCFG itself. Although it might not be appropriate for every presentation, use it whenever you can. If you are speaking to a group such as a farmers’ market organization or vegetable growers’ group, for example, some participants may be interested in starting a cut flower business and need to know about the ASCFG. To encourage membership, the office will send you “On the Spot” coupons that provide a membership discount for new members.

I don’t have time, you say. Of course, finding time to give these presentations isn’t easy. The demands of the farm are intense and constant. But as you know, sometimes you have to look beyond the immediate to the long-term. If you want your business to grow, you take the time to develop relationships with new customers, build new infrastructure on your farm, and plan your crops. In the same way, ensuring that the local flower movement continues to grow requires that we all work to spread the word about the benefits of local flowers. We are at a tipping point. I think Jennie Love said it best in one of her blogs:  “For many years, it has been a real uphill battle for local growers to sway the hearts and minds of the consumer masses. But after a long struggle…real change is underway!” You can make the difference. Get the word out wherever you can!

At its March 2015 meeting, the ASCFG Board voted to produce a video to promote local flowers. Our objective was to create a documentary that could be part of a powerful Buy Local Flowers campaign and would convince viewers to join the local flower crusade. We wanted to clearly demonstrate the benefits of local flowers:  fresh, long-lasting, variety, fragrance, low carbon footprint, sustainably grown, great value.

We were a little nervous, because none of us knew much about filmmaking or how to find a good filmmaker. Serendipity intervened. My local Fredericksburg, Virginia newspaper reported that an Academy Award-nominated documentary* filmmaker had just completed a highly acclaimed film on the Rappahannock River, a well-loved historic river running through Fredericksburg. I joined the Rappahannock River Society, bought the DVD, and was totally impressed with the quality.

Unbelievably, this well-known filmmaker lived in Fredericksburg, so I decided to try to meet him and get his suggestions on finding a filmmaker for our project. Bayley Silleck met me for coffee in downtown Fredericksburg and listened carefully as I described our project.  Before long, it became clear that he was interested in doing the film himself! I was stunned and thrilled. But Bayley is a nature lover and his wife a master gardener, so this project had natural appeal for him. He brought in a colleague, Rob Cleaton, with whom he had worked on “Rappahannock.” Rob has done a lot of work on TV shows such as Breaking Bad and Lost, and is a creative genius. Rob also lives in Fredericksburg—I couldn’t believe our luck!  Negotiations on the contract were easy and quick, even though our budget was tight for such a project.

We had sufficient funds for one long-distance visit by the filmmakers, and decided that would be to Frank and Pamela Arnosky’s farm (Texas Specialty Cut Flowers). The rest of the filming was in the Mid-Atlantic region, but we felt that, even with somewhat limited geography, we were able to give viewers a good feel for a variety of farms, florists, and business models.

Working with Bayley and Rob was a delight. They truly cared about our project and it showed. They devoted an amazing amount of time to our film—long days traveling, filming, and editing. Bayley even agreed to be the narrator for our film. Rob and Bayley also had many creative ideas for improvement. For example, we wanted our film to promote both local flowers and the ASCFG, but our attempt at putting these two messages into one short film seemed to muddy the waters. Bayley and Rob suggested making it two separate films—one on local flowers, and a much shorter one promoting the ASCFG. That worked! Our finished DVD contains both videos, so you can show one or both as suitable for your audience.

*The documentary is “Cosmic Voyage,” which received an Academy Award nomination in 1997. 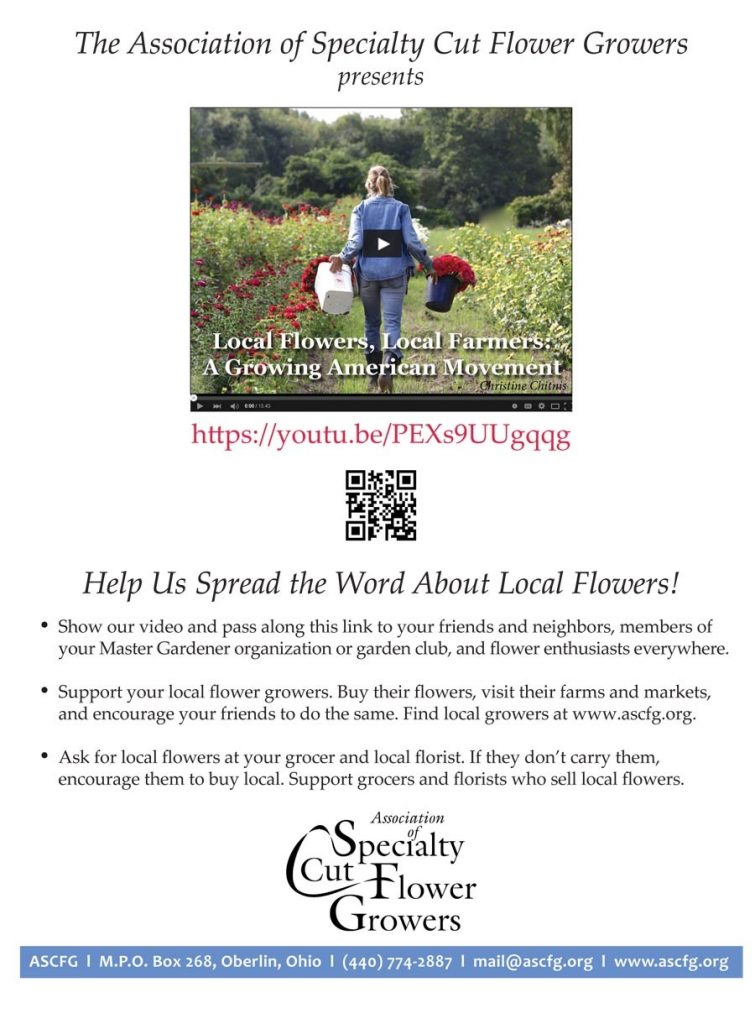