Time to Make Some Hard Calls

As this season is winding down, we are looking ahead to changes we’d like to make for next year. I generally make rough qualitative notes all season, and keep checking in with myself about what we wish we had more of and what crops require too much from us, and aren’t paying for the effort and space they need.

As I wrote earlier in the year, we had added back a few crops this year based on what I saw in New Zealand. We planted cosmos, annual centaurea, and Scabiosa purpurea, with a renewed hope that we could cut them at a more closed stage for a longer vase life. Scabiosa has been a success but we haven’t been able to keep up with the daily maintenance on the others.

Sometimes it’s difficult to look beyond our daily and weekly to-do lists to work on the big picture plans for the upcoming year, but I think it’s necessary to hold onto as many details and feelings while they are fresh. Maybe it sounds negative, but for me it feels more liberating, kind of like donating away clothes that have been in my closet for years that I like but I never wear. Will I miss them when they are gone? Or will I feel energized by more space to focus on what we grow best and use the most?

I’m not suggesting that you all should stop growing these crops, but we found that in our repertoire, we just don’t use or need them enough to bother growing them. It’s tough, of course, because I really like many of these, but they just aren’t paying.

Calendula: I used to grow it to bulk up our offerings on the early end, but we harvested fewer than 30 stems this year because we just didn’t need it and the stage of harvest is rather specific to yield long lasting blooms. Also: sticky stems.

Carnation ‘Black and White’: This one is so beautiful and unusual, but the stems are too short for our regular bouquets and we weren’t longing for more ingredients for our short bouquets during its season. We don’t need it.

Centaurea: not high impact enough for the constant cutting required to stay ahead of spent blooms.

Cosmos: I love the floaty, airy blooms, but unless a designer needs it in bulk for an event, we really don’t sell it in solid bunches, and they get lost in our mixed bouquets. I found myself composting these stems after bouquet making because they weren’t being selected by our bunchers.

Chocolate cosmos: This is one of my all-time favorites, so I will probably keep growing it as a bedding plant but we just haven’t gotten the balance right to yield marketable stems. Also, in not having them, we haven’t really missed them.

Cynoglossum: too fussy for time of harvest and stage of harvest, and sometimes wilts at market. Shatters. Beautiful blue color that just wasn’t needed during its season this year.

Dianthus ‘Sweet Mix’: We’ll keep growing the white for June wedding work, but we fell behind on cutting the colorful ones, and didn’t need them either.

Verbena bonariensis: I love this plant in the landscape and I had planned to pop in a tray or two, but we accidentally sold all the plants before I snagged mine, and I don’t miss them in cutting or bouquet making. Purple also hasn’t been as popular this year.

Cress ‘Wrinkled Crinkled’: I do like the color and texture of this greenery, but the harvest window of mature enough but not shedding seeds is rather short and the stems have an odd “Band-Aid-esque” odor. We are always/still on the hunt for interesting greens for all seasons, but we are taking a year or two off from this one. I reckon it has self-sowed quite a lot, anyway, so we’ll have some for years to come regardless of our nurturing. 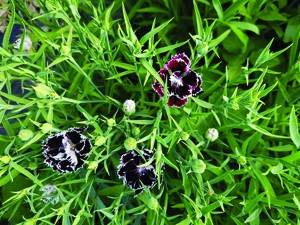 Glads are on notice. We had a thrips infestation and a complete crop failure and I don’t even really miss them, it seems. I’ll give them another chance next year, but maybe we just don’t need them.

As we plan to make these changes for next year, we can either plant a few fewer rows to take care of, or we can try some new and unusual items to add to the mix. I can’t wait to pore over the seed catalogs to make those decisions when things really start to quiet down.
Warm wishes of bountiful harvests to you from us here in Maine!