Winter can be pretty grim here in Maine. Over the last couple years I hatched a plan for a January adventure to expand my flower horizons. I follow farmer florists all over the world on Instagram and reached out to several in the South Pacific to see if I could finagle a visit and a tour or something along those lines.

I sent a message to Jeanine Wardman at Verve in Marlborough, New Zealand, and she quickly responded that she’d love to have me.
I hustled through my seed ordering and planning that usually stretches through the month of January, and set off for different hemispheres January 8th. After 30 hours travel time I arrived in Wellington for a couple days to recover from the flight, and look at some plants. Wellington is breezy, and I arrived right in the middle of summer, greeted by municipal plantings of succulents, tall New Zealand flax plants, agapanthus, impatiens, lobelia, sweet peas, and delphinium, as well as palms and ferns. This combination of heat-loving and cool-loving plants struck me as quite a juxtaposition.

Wellington has a lovely botanical garden with many roses, and an herb walk, as well as a conservatory full of begonias, orchids, staghorn ferns, and tropical water lilies. My farm is in growing Zone 5, so hedges of bay and rosemary were novel and awe inspiring. A Google search tells me the growing zone in this region of New Zealand is in the 9-10 range. I think it varies widely depending on elevation, which explains why no one could really give me a straight answer on zones. Nights are cool. I have to admit, I am easily confused by temperatures in Celsius.

I hopped a ferry from Wellington to the South Island and Picton. As the boat navigated the sounds on our way into port I ogled the greenery of the landscape. Mixed shrubs and ferns reached just down to the water’s edge. The view reminded me of a movie backdrop with such saturated colors.

From Picton I traveled by bus to Blenheim, a small city in the middle of New Zealand’s wine country. I saw many grapes, cattle, sheep, olives, cherries, and plums from the road. The bus driver explained that folks are “re-swamping” some low-lying wetlands that have been overtaken by willows for wildlife habitat. The dead trees remained as skeletons, looming on the flat land between the hills.

Margaret Hammond, Jeanine’s shipping manager and harvest crew leader, fetched me from the bus station on her way to drop off a couple boxes of flowers they were shipping to florists in other parts of New Zealand via refrigerated truck. Margaret is a pistol and we were quickly talking about flowers and adventures between errands on our way to the farm. Margaret explained that next day was a wedding delivery, so I should be prepared to hop in the van early to get on with the greenery install.

That evening Jeanine welcomed me into her studio as she worked on the personal flowers for the next day’s wedding. There’s something very special about witnessing someone going through familiar motions and emotions prepping for work you know well. I think we farmer florists often find ourselves isolated on our own farms and in our own studios, and it felt amazing for me to perch on a stool and watch as someone else reads their production notes and pulls buckets from a cooler, or snips a couple more branches to add that final flourish.

The next morning Jeanine and her team had loaded up three vehicles with flowers, greens, vessels, and bouquets, and we were off to a seaside vineyard estate venue to make some floral magic. My assignment was to assist Kelly Hammond, Verve’s farm manager, in an epic greenery drape where we zip-tied branches to the 3 sides of the tent rails. I love greenery, so this was right up my alley. We mixed together local branches of several types of oak, manuka, ivy, and two types of birch.

The other ladies were scurrying and creating some bright and simple centerpieces they built on site in jam jars. I appreciated the clean look to the tables. I have not done much on site designing in my wedding work. What a shot of adrenaline! Jeanine composed some large urns for the entrance to the tent. As the person in my business often making decisions and directing others, being directed and helping out felt like a nice vacation already. I don’t do too many big installs, so this felt like an adventure wedding. I loved expanding my skill set. 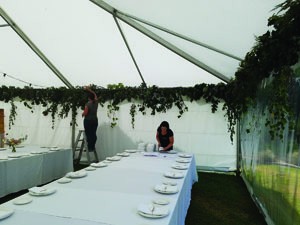 The next day was Sunday and that is a quiet day at Verve, but Jeanine let me tag along on a corporate delivery she makes at Cloudy Bay, an upscale winery and tasting room. Jeanine is a great match for the vibe there because they want garden-y but clean and refreshing flowers. We delivered a vase of Monarda citriodora and some very nice cosmos for the restrooms. Jeanine and I also tasted some wine after we set up the flowers. I’d say winery accounts are pretty good weekly customers to have!

The next two weeks brought regular field work, harvesting cosmos and Scabiosa atropurpurea. Before this trip I had resolved to grow few or none of both of these as they seem to take ages to harvest and are difficult to keep up with. Now maybe you all already know these tricks, but Jeanine taught me to harvest the cosmos before it opens, just as you can see a petal. The blooms open beautifully in the cooler and how nice to have buckets full of perfect cosmos, rather than blooms that are too open and about to shatter!

The “scabbies” are a big building block in Verve’s product offering, but Jeanine prefers to cut epic stems, maybe with the primary bloom having gone to pod already, with the next flush just opening, and still plenty of buds attached. This made so much sense to me, as usually I would cut individual stems for what seemed like hours and end up with just a couple bunches. I’m definitely adding these tricks to my toolbox and giving these crops another go on my farm.

At Verve, most flowers are sold to floral designers and shops miles and miles away, so the stems will be in a box out of water for a day or two as they go by truck to their destinations. This means that Jeanine generally must hit that sweet spot in the harvest window of mature enough that the stems won’t shrink and wither when they are dry, but also young enough that they still have days of vase life after they are hydrated. I found this a bit challenging to achieve as I am used to selling all my blooms hydrated in water and direct to the designer or consumer. I realized that I had come to enjoy the flexibility and freedom there. I can use (and relish!) stems with personality that might break or not rehydrate if shipped, as well as fragile items, open blooms, and short stems. 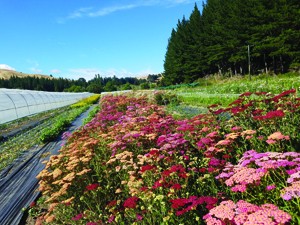 Jeanine’s style is a garden-y wildflower look, so she grows a lot of achillea, scabiosa, mint, sweet peas, limonium, lysimachia, cosmos, eryngium, foxglove, helichrysum, ammi, and daucus. She had dahlias and lisianthus growing, but their bloom time is more February-March. I really liked seeing her tweedia growing in the tunnel, as that is a flower I have bought from California but never tried growing. She also had some very impressive thalictrum that really adds elegant airiness to bouquets and designs.

Two of the other visiting farmers at Verve during my time there were Juliah Thrift and Alex Larkin. Juliah used to be farm manager at Silver Lake Farms in Los Angeles. Alex has worked for Sas Long at Floralora Flowers in Ontario. The three of us became a little troupe for a couple weeks, checking out the farmers’ market in Blenheim and going on hikes.

Our farmers’ market in Portland, Maine is very bustling and full of great products, but I really enjoyed visiting a market with local figs, pine nuts, hazelnuts, walnuts, apricots, olive oil, and a bit of citrus. We had fun shopping, but saw that cut flowers weren’t a big part of the offering at that market. We saw some lilies and some mini callas.

I had a blast weeding dahlias and chatting with these folks about flowers, farming, work-life balance, wedding work, favorite blooms and textures, and which colors are shuffling to popularity.

As I worked alongside Jeanine, her crew, and the visiting farmers, I reflected on my setup here in Maine. I have a great crew and some managers among them. Our farms are complex, and I think sometimes in the heat of the season, we communicate in a bare bones way, more of a need-to-know basis. I realized when I was working at Verve that I really appreciated knowing a bit more about what we were working on, why, and where exactly those stems were destined. It made me want to be clearer about those things with my crew. My constant aspiration for my farm is to create smoother systems for us to work within, allowing us to spend more headspace on growing, selling, and designing with beautiful floral material.

I think if I had to choose one theme for my whole trip, it would be my fierce love for recognizing familiar plants, systems, rituals, and routines while seeing vistas, species, ideas, and norms that were completely new to me. I loved that foxgloves are weeds in New Zealand and grow easily mixed among wild ferns at the edges of the bush. I grow eucalyptus on my farm, but it never gets taller than 5 or 6 feet before winter comes, but next to Jeanine’s cottage, a gum tree towers. 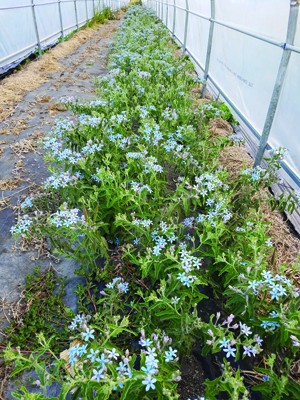 Now I’m back home, seeding seeding seeding, thinking about my workflow, and getting ready for a bountiful 2017. Warm wishes to you all from Maine, and happy planting!