As I sit down to write this, I’m still struggling to recover from information overload after the ASCFG grower meeting, and then the Board meeting in Portland this February (and I’m writing this late, well after deadline, so let’s just say that a fair amount of time has gone by). Let me tell you, it was a whirlwind. One of those lose-your-voice-up-till-wee-hours-scribbling-notes-on-napkins kind of a week.

I was amazed to see how many new conference attendees we had—a huge group of maybe 30 people out of the 90 people in attendance. I knew this was the case going into the week, so when I arrived early at the hotel I of course started trying to spot them and say hello. This is usually easy. At past conferences in, say, Grand Rapids or Fort Worth, you could tell a farmer from a mile away. Not so in Portland! In the restaurant or lobby or hallway I found myself lurching towards countless young couples in beards and flannels, ready to introduce myself and ask if their anemones had started to emerge, only to stop myself abruptly when I realized that every person in sight looked like this and none of them were in fact associated with the ASCFG. After all, we were in Portland. Needless to say, it was a different kind of conference hotel experience, one where the coffee was fair trade and gluten-free pastries abounded.

The day of sessions itself was packed to the brim with presenters new and old (to the ASCFG, people!). I’ve heard it said that this was one of the sexiest lineups yet.* We tried hard with this conference to respond to demand we’ve heard out there in the pipeline about new topics and some fresh presentations. I for one was pretty pleased with how it all turned out. Here are just a few of my favorite tidbits from the day.

Poppy Davis wowed the crowd on many levels with advice for long-term financial planning. On the newbie front, she told us that farmers just starting their businesses can and should save their receipts from the first moment they put any work into their farm. Even if they don’t make a sale for three years, they can hold on to all those years of receipts and claim them later. For those in the room that were farther down the farming road, she offered a plethora of wisdom for the long haul. This quote stands out to me:

For many farmers and ranchers, the richer you get the poorer you feel. You are constantly improving the value of your land and paying down long-term debt, but you never have any more cash. That’s called getting rich the old-fashioned way. Sometimes after a while the farm operation that was building wealth by operating at a profit starts operating at a loss. Then the temptation is to take some of the long-term wealth the business created over the years and put it back into the business. That’s how farmers go bankrupt and lose everything.

She further elaborated on the difference between being low on cash and rich in long-term assets.

If you have operating income greater than operating expenses but you spend the rest of your cash paying down debt and buying assets and expanding your operation, you are going to be “cash poor”, but you might be on the road to building real wealth.

Things to begin to think about, no matter where we are in our farming paths.

The hallway after Poppy’s talk with filled to the brim with people hungry to pick her brain. This won’t be the last of her involvement with the ASCFG; we’ll be reeling her in to present on more topics of finances over the long haul of farming.

Janet Foss is skilled in so many areas of growing that her name gets thrown around in relation to topics across the board. “Need a speaker on X,Y, or Z, see if Janet’s available”. “Having trouble growing X, see how Janet grows it.” We asked her to speak on “Shoulder Season Crops”, as this is a topic that eludes many new growers, and Janet has got the shoulder season down.

We all know that in the first few years of flower farming, you’re rich in flowers for three months and then by the time you get your bearings to sow more successions, it’s too late. Janet hit home by stressing this no-brainer yet often impossible-to-internalize fact: If you already have your customers in July, you might as well keep going with sales through October.

What is your farm potential, she asked? How many flowers can you reasonably pick in a day and fit in your van? The point of season extension, she said, is to “keep going with selling as far into the season as you can. When it stops being profitable (a delivery for $50 that costs more than it brings in), it’s time to take a break.”

If there’s a month where Janet doesn’t have anything to sell (unlikely these days), she’ll look to her local area for inspiration to see what’s growing that she could be cultivating on her own farm and selling. Drive around the neighborhood! Visit the local botanical gardens! Think outside the box!

I’m sometimes scared that we’ll all end up growing the exact same crops and lose variety in the market. This advice hit home for me, both for extending the season and our frame of mind when it comes to crop selection.

Denise and Tony Gaetz from Bare Mountain Farm blew my mind (as always) with their application of theory to actual practice in their fields. Specifically, they focused on their transition to no-till farming on their property over the past number of years. In addition to detailing their processes of both crimping down cover crop (and planting right into it!) and occultation using heavy tarps, they really hammered in the fact that no two fields are alike (much less two farms). There’s no one-size-fits-all recipe for soil management. You can have different soil types that require different strategies located just feet from one another. As Tony and Denise dive deeper into trialing techniques that are gentler on their soil, they continue to see improvements in their plant health, microbiological activity, and general feasibility of systems on their farm. What a duo to watch. 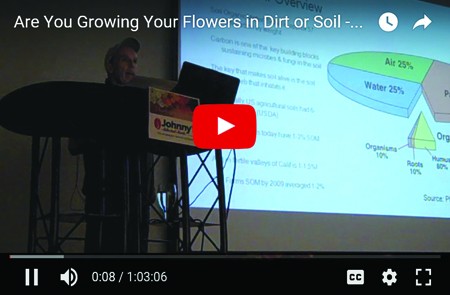 I hope you’ll all check out recordings of these presentations in the Members Only section of our website. Thanks to everyone who made it out to the conference!