Farmer-florists bring an abandoned flower farm back to life

The first time Karen “Mimo” Davis and Miranda Duschack saw a farm in the Dutchtown neighborhood of St. Louis, Missouri, Miranda took one look at the condemned, vandalized property with an ancient farmhouse and greenhouse with broken panes of glass, nonfunctioning waterline, and countless other projects and said, “Who’s going to buy this?” Mimo took one look at it and said, “I’ll take it.”

The couple bought the property in 2012 and started Urban Buds: City Grown Flowers.

Mimo and Miranda met while working as extension agents at Lincoln University Cooperative Extension. As their friendship developed into a romance, the couple planned their future, which included a shared dream to farm.

Mimo had a background in flower farming but Miranda, who came to Missouri after growing fruits and vegetables at a Franciscan convent in Dubuque, Iowa, admits she was initially skeptical about growing fresh flowers, especially because the couple planned to start farming in the middle of the recession. But Mimo was resolute in her desire.

“I just felt that in central Missouri, there were a lot of great vegetable farmers and zero flower farmers. When tomatoes are in season, there are a ton of tomatoes at the market; when freesias are in season, we’re the only game in town,” Mimo explains. 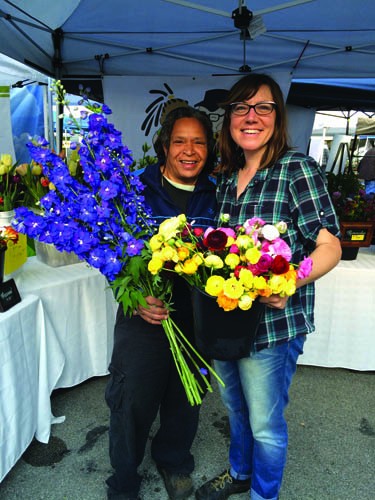 The decision was made when the couple went to visit one of the florists Mimo delivered to from 1990 to 2000 (when she grew flowers on a farm in Ashland, Missouri) who told them, “We’ll buy anything you have. Bring it.”

Everything Old is New Again

Mimo and Miranda forged ahead, transforming the abandoned and overgrown landscape into a flower farm bursting with color. It’s a point of pride for the pair that their farm, Urban Buds: City Grown Flowers, is on the site of a flower farm that dated back to the 1800s.

After purchasing the farm, the couple tracked down one of the previous owners—a man in his 80s who was the third-generation farmer to grow flowers on the land—and invited him over. He stopped in to visit and spent time telling Mimo and Miranda stories about the farm and showing them photos of how it used to look.

The home, greenhouse, and land changed hands several times since the last blooms were grown onsite. Mimo and Miranda were thrilled to bring it back to life as a flower farm—and their customers loved the farm, too.

Since then, Urban Buds has expanded to include five contiguous city lots owned by Mimo and Miranda along with two rented lots, totaling almost an acre. The couple grows 70 different varieties of flower from azaleas to zinnias.

Farming in an urban area wasn’t an intentional choice: It was close to their work at Lincoln University—until 2017, when Mimo left her job to farm full-time, both women continued working in the extension office 40 hours per week—and closer to their friends than Mimo’s former flower farm. Being just a few miles from the iconic St. Louis Arch also has its benefits. Their farmers’ market booth is just 2.5 miles from the farm, which means customers can see where their flowers are grown.

“We’re so accessible,” Miranda says. “One of the real benefits of urban agriculture is that our customers can see what’s happening on the farm in real time.”

Thanks to its location in a residential neighborhood, passersby can always see what’s growing on the farm, but there are few on-farm sales. Instead, Urban Buds blooms are sold through the Tower Grove Farmer’s Market and wholesale accounts, including the florist who encouraged them to pursue flower farming.

The demand for their local blooms has blossomed. In 2016, Urban Buds expanded to a double booth at the market and Miranda says customers often say, “Your flowers are so much more unusual and last so much longer than the flowers I get at the grocery store.”

One of the big differences, according to Mimo, is fragrance. Urban Buds specializes in growing fragrant flowers that don’t ship well, including sweet peas, lupines, and tuberose.

“[Most] of the flowers that are shipped in are bred not to have fragrance,” says Miranda. “I had one woman cry over a bunch of sweet peas because she remembered them from her grandmother.”

It’s not just the fragrant flowers that are popular; all local blooms are sought-after, according to Mimo.

“People here just don’t know their flowers; when they see a ranunculus they are just so blown away that it was grown here in St. Louis, locally, and they’ve never seen it before,” she says.

That “blown away” feeling led customers from the farmer’s market to start asking Mimo and Miranda about doing the flowers for their weddings, and the couple grew their business again. Since their first wedding bouquets were delivered in 2015, the bridal business has grown to account for 50 percent of their revenue—and the couple hopes Urban Buds will continue growing.

To that end, the couple added high tunnels to extend their growing season from February through November, and plan to extend to year-round growing in 2018 thanks to a grant from the Missouri Department of Agriculture.
“It’s been really special to bring this farm back to life,” Miranda says.

Jodi Helmer is a freelance writer in North Carolina. Contact her at [email protected]