All in the Family

Bruce and Claire Hammelman were growing hazelnuts, cherries, and vegetable seeds on a farm in Lebanon, Oregon, when they got a call that would change their lives.

After three decades in business, Bruce’s aunt and uncle, Bernadette and Dan Hammelman, were retiring and selling their cut flower farm, Hammelman’s Dried Florals. They hoped the next generation would step in and take over.

“We thought it was the coolest idea ever,” Claire recalls. 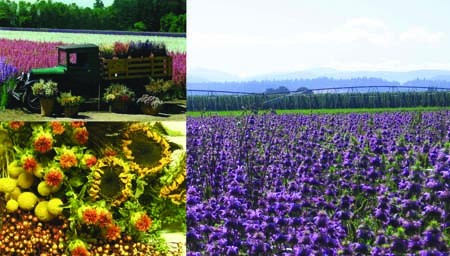 Bernadette and Dan Hammelman started the company in 1986. The flower farm is part of a 950-acre operation in Mount Angel, Oregon, that includes wheat, grass seed production, and hazelnut trees. The couple added flower production in 1989 and grow 55 acres of assorted blooms, including celosia, eucalyptus, craspedia, dogwood, yarrow, millet grass, and echinops.

“We certainly learned through trial and error,” says Bernadette. “We started with four crops; we now grow 60 or more different items.”

As the name suggests, Hammelman’s Dried Florals is best known for its dried flowers, which are shipped across the U.S. and around the world; their biggest clients are overseas in countries like Japan and South Korea. The farm also grows 10 acres of peonies that are sold fresh to wholesale and retail accounts.

Bruce and Claire are high school sweethearts who grew up in farming families.

In 2003, after graduating from Oregon State University—Bruce earned a degree in agricultural business management and Claire graduated with a degree in horticulture—the couple started their own farm in Lebanon, about 40 miles south of their hometown of Mount Angel.

“Farming is in our blood,” says Claire. “We always knew it’s what we’d be doing.”

Despite their success growing food crops in Lebanon, the couple hoped to return to Mount Angel to raise their five children near their families. The opportunity to take over a family farm proved too good to pass up.

“We’ve watched the 30 years of sweat and tears that went into building this business,” Claire says. “We’re walking into a well-oiled machine.”

There is also a sense of pride of continuing a family tradition.

“It brings us joy to see [our aunt and uncle] excited about us taking over the farm,” says Claire. “I know it also brings them a lot of peace that it’ll stay in the family. We hope to someday pass it on to our children.”

For Bernadette and Dan Hammelman, the decision to sell the flower farm was difficult, and keeping it in the family means everything to them.

“I’m very protective of what we’ve created over the years and have been struggling to find the perfect fit for the business,” says Bernadette.

“When Bruce and Claire came to mind, I knew I had found them! They will be the youth and enthusiasm to take Hammelmans into the next generation!”

The couple will mentor their nephew and niece-in-law through the transition, which started early in 2016 and will take a year to complete. For the past year, Claire has been making the one-hour trek between Lebanon and Mount Angel several times per week to learn more about the operation. The couple has also attended several conferences—and has plans to attend several more—to learn the nuances of growing and selling cut flowers.

“I’ve been getting a crash course,” Claire exclaims. “We grew up around the flower farm but didn’t understand their business.”

At the most basic level, Claire believes that growing cut flowers is not that much different than growing food crops. On the flower farm, she plans to use similar strategies for weed management and disease suppression that worked well for growing food crops. The biggest difference between the two farms, she explains, is the process for getting the crop to market.

At their edibles operation in Lebanon, Bruce and Claire were growing under contract. All of the nuts, cherries, and vegetable seeds sold before the season started, which meant no social media campaigns or setting up booths at farmers’ markets. For the flower farm, the couple will have to use Facebook, Instagram, Twitter, and other marketing strategies to ensure their fresh and dried flowers go from field to market.

“Even though a lot of their marketing is word of mouth and repeat customers, it still requires attention,” says Claire.

Looking to the future

The couple plans to continue the social media marketing their in-laws started and eventually explore new avenues to get their products into the hands (and homes) of consumers, including partnering with third party channels like Zulily.

And, while Claire cites the “great crops and products” that her aunt-and uncle-in-law are known for, she plans to expand the sale of fresh flowers.

“The plan is to enhance what’s being done and see where it leads,” she explains. “We’re enthusiastic about the options and we’re earnestly going to do our best.”

One of the things Claire is most excited about is the opportunity to get creative. Dried flowers, she explains, can be dyed or preserved as well as sold naturally dried.

“There is so much creativity that you can have with it and it’s cool that a single crop can be taken in so many different directions,” she says.

And, unlike fruits and nuts, there is no expiration date or shelf life for dried flowers.

“We can actually preserve the harvest and make the crop last,” says Claire. “It’s kind of cool to have a dried bouquet of flowers you grew that season that you can look at and think about all of the hard work that you put into growing them.”

Jodi Helmer is a freelance writer in North Carolina. Contact her at [email protected]