Weed and Disease Control the Old-fashioned Way: With Steam

At Sunny Meadows Flower Farm, we grow cut flowers year-round in both heated and unheated high tunnels. During our extended learning curve process of greenhouse growing, we have had to deal with a few disease issues including Rhizoctonia solani, Phytophthora, and downy mildew, all of which had us wondering if winter growing was worth the effort.

Here in Ohio we are limited by the lack of sunshine: 200 out of 365 days a year we have a heavy cloud cover—Seattle has 230 days. Without sun December through February it’s hard to dry out the greenhouses, and for soil with a high water table, the challenge is making the greenhouse inhospitable for bacteria. It was costing us revenue that not only we relied on, but so did our 1-2 winter employees. No matter what we did year after year, we had something that took out whole beds at a time, not every bed, and mostly Matthiola. 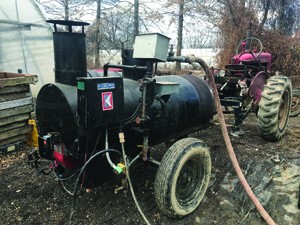 Since the pathogens we had thrive with cool nights/warm days and wet conditions, we started by trying to correct our cultural practices. We began by venting the greenhouses at least twice a day and raising the night temperatures to reduce the relative humidity (RH). When we were heating our greenhouses to 38 degrees at night the RH would spike to 100% as soon the sun went down and the houses were closed up for the night, creating condensation. So, we raised our night temp to 50 degrees, which made the conditions perfect for Phytophthora. We also sanitized the edges around the greenhouse interior, and the plastic. We made sure we were keeping it clean and dry by watering significantly less for the winter months. Every year it seemed the conditions in the greenhouse were prime for some sort of pathogen.

Phytophthora, sometimes referred to as water mold, can remain dormant for years in soils until conditions become favorable, which happened first in a bed of dusty miller. Downy mildew thrives under cool nights and wet conditions, with sporulation on the undersides of the leaves (different than the powdery mildew that you may experience on zinnias), making it even harder to treat. Rhizoctonia solani is a pathogen that cannot be completely controlled, and likes it warmer than downy mildew, making it hard to find the right temperature for the greenhouse. These can remain in soil for years to come; it was even suspected that theses pathogens were in my soils before we were farming here.

We had professors from The Ohio State University come out and they would have a heyday looking for pathogens, once declaring it a “raging infection”. They’d find pathogens on the underside of so many leaves, which was really disheartening. They suggested a soil drench once a week with synthetic fungicide, move the greenhouses to another location, replace all the dirt in the ground beds with fresh clean soil, or find someone who can steam the beds—all seemed like not very viable options. We started with RootShield and ZeroTol, but those would have been more useful in prevention than treatment. We used Aliette as a soil drench because it was something Dr. Hand suggested from her research, but we were still seeing some disease pressure. Since we grow mostly organic, we weren’t pleased with using a conventional chemical and not seeing results, so we opted for steaming as another solution. We were warned of the dangers of the pressurized tank, but knew this may be the only way we would be able to grow year-round sticking to organic practices.

We are a part of the Vermont Vegetable and Berry Growers Association, so we reached out to ask if any of them had experience with using steam for disease control in greenhouses. We got a response from Pete Johnson of Pete’s Greens who told us he had gotten a few out of Canada that were used for tobacco production, and that he was using it for weed control in his greenhouses. So up to Vermont we went to procure one to try to come up with organic methods of weed and disease control, with help from this ASCFG grant.

We really had to look back and found a couple articles in the Ball Red Book, 13th edition. If you go any more recent than the 13th edition (1975), the authors didn’t talk about it. Growers went from steaming to using methyl bromide instead, a less labor-intensive bang for your buck, but now illegal for use in fumigation. Steve talked a lot to Joe Schmitt about his time steaming beds in his youth, and tried to reach out to anyone else with steaming experience—academics and growers.

He found a chart that showed at 157-178F most pathogenic bacteria, plant viruses, and weed seeds die during pasteurization. Once you start going much hotter than that you start to sterilize your soil, killing all forms of bacteria. We wanted to pasteurize the soil, leaving the good bacteria to recolonize. Nitrifying bacteria die above 180F, which help break down nitrates into available nitrogen for the plant. Ammonifying bacteria are hardier and break down nitrates into ammonium, which can sometimes burn plant roots (Ball Red Book, 13th Edition).

Worried about killing good bacteria, we turned to technical information from the composting process. Good compost needs to be heated up to 160-170F and turned multiple times to keep the microbes active. Once you go over those temperatures you risk suffocating biological activity. Well-made compost kills pathogens and weed seeds if done correctly. So, I wanted to try to emulate a composting process in my greenhouse beds, minus the organic matter unfortunately.

We purchased an old “steam Jenny” and made minor repairs to get it up and running. It’s just a big metal drum, and an oil burner that heats up the water inside, and with low pressure of 15 psi. WARNING: If not used correctly this piece of machine can be dangerous, so we made sure to replace the pressure relief valve. We had to buy a specialty tarp that could hold up to high temperatures. We also got a canvas sock to carry the steam the length of the bed. We use logging chain to hold the tarp down as the steam lifts the tarp and makes a big bubble. 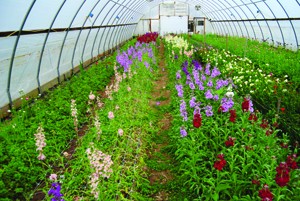 We started by trying to steam a full bed (300 square feet) at a time, and that was too much area. We’ve found that it works most efficiently for us to do half a bed (176 sq. ft.) at a time. In most cases this take us 1.5 to 1.75 hours per half bed, to get up to 176 degrees and hold it there for 30 minutes. There were days when we would try to do more than half a bed at a time, and it seemed as if we were using up too many labor hours for a bed, that’s how we ended up on half beds at a time. On a normal day we would get the steamer out to the greenhouse from the barn, hook it up to water to fill the tank, and end up doing one bed.

We found that soil moisture and depth have an effect on how long it takes. We are generally going four inches deep for disease control, but for weed control, 2” is plenty and really speeds up the process. There were days it seemed like it was hard to get it up to temperature down to 4”, and other days we had no issue. We had some mechanical issues along the way that had Steve scratching his head, really scientifically.

Our cost of labor is about $.22 sq. ft. so total per bed, the steamer cost $66 labor and $33 fuel to kill all the weeds and diseases we have been dealing with. We were able to compare this with the cost of us weeding and hoeing a bed in enterprise budgets, not accounting for loss we would have had in the bed from disease pressure. On paper, even with labor hours it takes steaming, it came out to make a crop more profitable than the labor it would have taken to weed this bed two to three times a season.

Out of our 55 greenhouse beds we have steamed all but six. We left one bed in each house unsteamed and treated it as we normally treated beds. These beds were our control in the experiment, so we could compare weed and disease pressure in different locations and on different crops.

From some of the first beds we steamed, we did notice on one bed the ranunculus seemed to be yellowing a bit, nothing we had ever seen. We sent plant tissue off to be tested and they found no trace of disease. We later figured out that it was the bed that we were a little too eager to plant and didn’t let the bed cool overnight before planting, and shocked the plant with about 120-degree soil. Oops.

We were also concerned about adding compost before the steaming process, so we left half the beds uncomposted with the plan to compost them after winter production, and to the other half of the beds we added two inches of leaf compost. We again saw no repercussions either way on plant growth.

In conclusion, we have yet to see any soil-borne diseases in the greenhouse, so we plan to steam our soil in all greenhouse beds at least once a year. We feel as if it is making growing flowers in the greenhouses fun again. We used to spend a lot of time weeding greenhouse beds—during the winter chickweed could become a carpet, and Galinsoga during the summer is a nightmare. We think that soil steaming for organic weed and disease control is a viable option for someone who enjoys using equipment and doesn’t enjoy spraying. We look forward to being able to continue research as we gain more experience with the results.