At the ASCFG’s first Seasoned Growers Meeting, speakers explored multiple options for aging, retiring, and passing on their farms. Although most of the participants at the March meeting in New Orleans had 20-plus years of flower farming experience and were clearly thinking about a slower pace in the near future, a few young couples said they attended to start long-range planning. Judging by the animated discussions during and after speakers’ sessions, the meeting tapped into a well of intense interest among flower farmers.

Poppy Davis, who is both a CPA and an attorney specializing in agricultural businesses, spoke for several hours over two days about succession and estate planning. She described the typical issues that face farmers as they age, whether they want to stay on the farm until death or pass it on sooner. Her mission, she said, was to help participants clarify their goals, understand the legal mechanisms available to them, and make an action plan to take home with them.

She advised growers to create two succession plans: one for the immediate future and another for the long term.

The main lesson she impressed upon the group pertaining to short-term planning was to get organized and set up systems so the business can continue to operate in case the farmer gets ill, injured, or worse. “Who is going to do payroll?” she asked. “Who can deposit checks?” Every farm should add a trusted employee or family member to bank accounts so the finances can be maintained. And there should be a second-in-command who knows the customers, procedures, and farming methods, and can step in and continue to generate revenue in the farmer’s absence.

Long-term succession planning is more complicated, with myriad ways farms can be sold, gifted, or passed along by inheritance. After explaining the ramifications of various legal arrangements, such as LLCs versus partnerships, Poppy urged growers to spend time thinking about their goals for themselves, their land, and their heirs. Once the farmer can articulate what he or she wants, then it’s time to see an attorney, who can use the appropriate legal tools to make it happen.

In most of the estate plans she has worked on herself, Poppy said, the main issue facing farmers is how to write a will that is fair to all heirs. For example, she described a situation in which a farmer has three children but only one child works on the farm; to divide the farm equally among the three is not fair to the child who works there and could result in one of the siblings forcing a sale. But there are legal mechanisms that can ensure the land will stay in the family, while still transferring assets to all three children. She advised people to think clearly about the situation they will be leaving behind, and to make an estate plan with an eye toward “avoiding unnecessary pain and sorrow.”

“The better the road map going in, the better it will be for everyone because no one thinks clearly in a time of grief,” she said.

Poppy’s clear presentation, depth and breadth of information, and her willingness to consult with people individually led several participants to comment that the cost of the meeting was money well spent, and might even have saved them a significant amount of legal fees when they do hire an attorney about an estate plan. 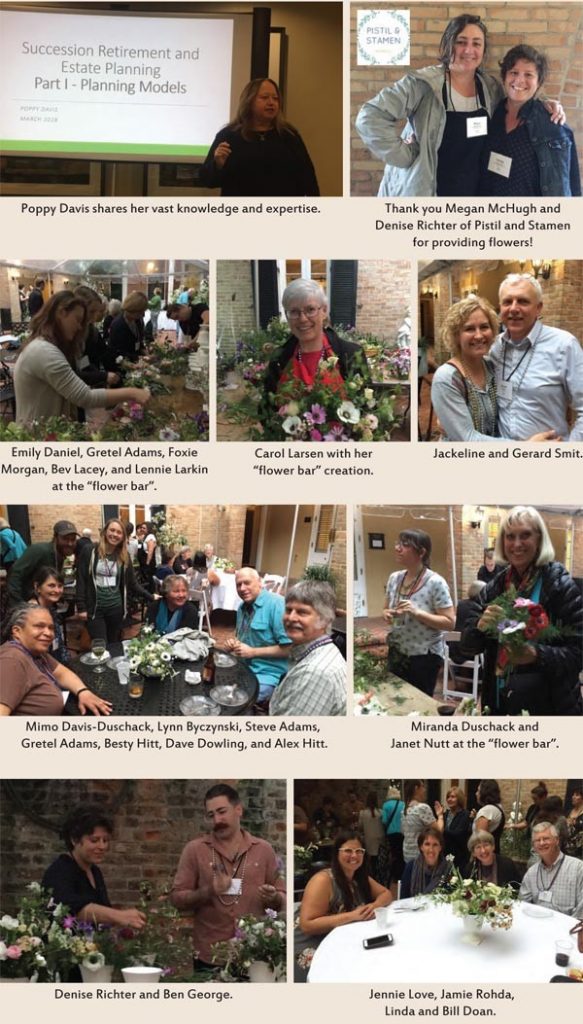 Alex and Betsy Hitt of Peregrine Farm in North Carolina are several years into a planned transition of their farm to a non-family member. Their goal is to live out their lives on the farm, but to retire from farming in about five years. Alex shared the Memo of Understanding they have signed with the former employee they are bringing on as a partner, with the intention of eventually passing the farm business on to her during their lifetimes. He described the legal and financial issues they have faced to make the transition work, and the structure they have put in place in case it doesn’t.

The Seasoned Growers’ meeting was about more than retiring, though. Other speakers suggested ways to improve quality of life and get additional help on the farm.

Mimo and Miranda Davis Duschak of Urban Buds in St. Louis presented information about the numerous grants they have received to build their farm. Mark Cain of Dripping Springs Garden in Arkansas described his apprenticeship program, which for 30 years has provided the labor for his farm. And he urged participants to evaluate their lives to be sure they are doing things that give them happiness and satisfaction as well as farming success. For example, he said, he has arranged the workday on his farm to permit a two-hour break for yoga every day, and he has recently started to play music with a jazz group on his day off.

“There’s not that much time left, folks,” he said. “What are we doing with our time?”

Lynn Byczynski is author of The Flower Farmer, and founder and former editor of Growing for Market. Contact her at [email protected]