Flower growers are curious about learning how their crops are used, but rarely have the chance to “see them in action”, where they end up, and their positive effects on people. As horticulturists, we know that a mixed bunch of flowers will brighten the consumer’s home, or perhaps the bouquet will be given to a customer’s friend who needs a lift. Flowers grown by ASCFG members find their way into voluminous church arrangements and in brides’ trembling hands. Some even locate their way to the performing stage. That is exactly what happened with the springtime blooms from ASCFG member Joan Thorndike’s Le Mera Gardens, Ashland, Oregon, in March of last year.

The Concerto for Florist was featured in the Oregon Fringe Festival, a series of exhibitions, plays and musical performances, sponsored by the Oregon Center for the Arts at Southern Oregon University (SOU). See http://oregonfringefestival.org/. The festival is organized entirely by students who write, select, organize, and perform in the festival. Jared Brown, who recently graduated with a Master of Music in Performance at SOU brought Concerto to the Festival after working with its composer, Stanford University Professor Mark Applebaum http://www.markapplebaum.com/, during a residency at SOU. Applebaum is a distinguished musician and composer and his works are performed worldwide.

Concerto’s music is not written in a conventional way using traditional notes and staves, but with precisely timed ensemble improvisations, instructions for particular sonic textures, and diverse musical rituals. Fleshed out in numerous, colorful inks and peppered with instructions for musicians to complete various performance art tasks, the score highlights (and brings humor to) mundane chores associated with everyday life. These undertakings comprise several dozen mini-performance art pieces, such as cutting a pizza, handing out towels to the audience, pouring a glass of water on top of an umbrella held by a fellow musician and mixing a martini. At the center of this work is a floral designer, working, building, arranging and completing a series of floral designs.

This is a challenging but fun performance, and allows for creating floral designs that are not stereotypically pretty or even commercially desirable. The work demands that large-scale designs be completed within the performance duration of precisely 50 minutes. In keeping with the music’s aesthetics, the plan was to develop sculptures of fresh, gorgeous flowers, yet maintain a somewhat outrageous appearance.

Collaboration Across the Country

As the featured “floral soloist”, DelPrince began by searching the ASCFG website for members near Ashland, Oregon. “I was delighted to find Le Mera Gardens and discover that not only was Joan near the area, but that she was just miles from the performance site.” A few emails and phone calls secured an arrival date and a general floral needs list. Time was precious, so instead of walking through acres of plants, Joan harvested samples ahead of time that showcased the best early-season flowers and foliage as well as how they could be sold (by the bunch, by the bucket). This showcase was waiting for DelPrince and Brown at one of the farm locations early in the morning, thus helping them to facilitate design concepts quickly. Once the flowers were chosen (the most important part), props were considered during a three-hour visit to a local Home Depot.

The first design was built around the idea of an arrangement on wheels. Physical movement of the work, both in progress and completed, was an objective for the sculpture. A metal dolly was used as the basis, and closet storage racks were cable-tied to a dolly frame, creating a skyscraper-like scaffold in grays and charcoals. Concrete reinforcement wire was bent and curved to create dynamic lines, pre-attached to the frame. Cardoon foliage (Cynara cardunculus) was arranged in rigid lines followed by succulent ornaments, made with wire spirals encircling the severed plant. Glass test tubes held Icelandic poppies and dangled in a line. The floral sculpture, named Contraption, was finally overwrapped with contrasting red vinyl “danger/peligro” tape.

The second design, Tubular Belles, combined the tenets of European mass design with Sogetsu Ikebana flair. Dried branches were harvested from a secret excursion to a private home trash heap, then encased with foam pipe insulation which allowed the twigs’ lines to extend, flop and bend. A feminine mix of pink peonies and apricot LA hybrid lilies paired with pink and purple lupines completed the design.

A third assemblage used a blue vinyl Adirondack chair as its base. Holes were drilled into the chair using an electric drill and 3/16” bit. Wire netting was added to create body, and fresh flower foam, provided by Oasis Floral Products, was affixed to the frame. The chair’s arms and sides were decked with Viburnum opulus, lilac, Dutch iris, and Euphorbia. Drapes of glittered, blue Curaçao-colored netting filled in the gaps and created an evil sea queen’s prototypical throne (I Got Rhythm Really Put Me on the Map).

Art is Where You Find It

This musical work’s life began several years ago (2000) and has since been performed seven times in five locations. It started with a discussion on a commuter plane ride from Memphis, Tennessee to Columbus, Mississippi. Applebaum’s concept is that all trades have their own inherent artistry and performance attributes, whether it be dance and music, or plumbing and floristry. The first performance of Concerto for Florist occurred in a bagel café in Starkville, Mississippi and featured a single design of green apples, blue hydrangea, and invasive Rumex crispus (curly dock) formed into a 12-foot sculpture hanging from ceiling rafters and resembled a dripping funnel. 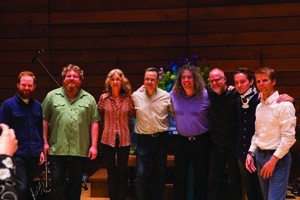 Concerto for Florist has also been performed with the La Jolla Symphony & Chorus (2011), Steven Schick, conductor, and used flowers grown in the San Diego area. Due to the large scale of the orchestra and performance stage, larger blooms were selected including Gerbera, Oriental lilies, and football chrysanthemums. Floral containers exploited typical stage props; a 10-foot ladder and a scissor lift. See https://www.youtube.com/watch?v=CuhIAvKhOb0 , highlights from that presentation, produced by University of California Television.

Artistic interaction is probably as old as humanity. Music partners with dance; theater with costume design. Painters strive to capture the beauty of nature, finding flowers both a muse and a subject. When flowers are part of the fusion, ASCFG members take notice. When consumers consider flowers and floral design, it benefits the entire floriculture industry.

Concerto for Florist and the Oregon Fringe Festival were produced by a grant from the Oregon Center for the Arts.