A survey of U.S. zinnia growers found a range of production systems, zinnia cultivars, and growing conditions, almost all of which may be susceptible or conducive to zinnia melt-down disease. Concern amongst this broad cross section of the industry highlights the need for further research on this problematic disease, which will be conducted over the 2018 growing season. 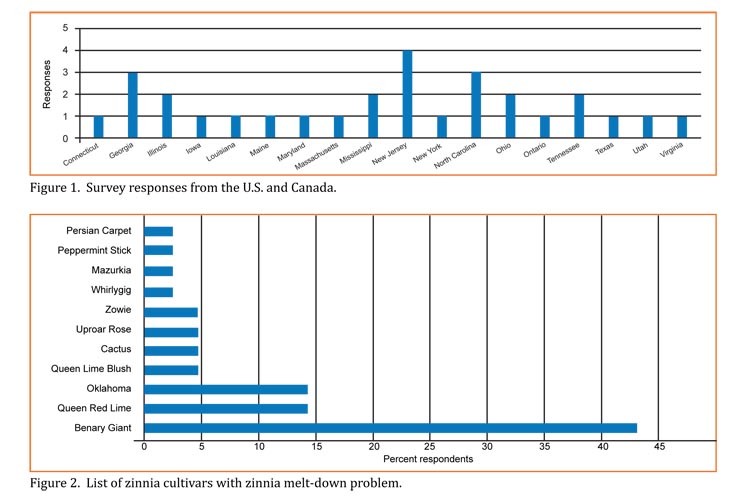 The cut flower growers surveyed indicated that they used rotation (33.8%); 23.1% used cover crop/green manure; 18.5% always had a complete cleanout after each crop; 10.8% had complete cleanout only if there had been a serious problem in the previous crop; 4.6% provide a crop-free period; 3.1% conduct solarization in planting consecutive plants.

Zinnia samples will be requested in 2018 from the ASCFG community (APHIS permit and sample shipment instruction will be provided by Dr. Baysal-Gurel) and Tennessee growers will be visited monthly starting in June through September 2018.

Diagnosis will be done on cut zinnia flowers using diagnostic tools including but not limited to culturing, microscopy, chemical and pathogenicity tests, serology (ELISA, immunostrip tests), conventional PCR, and sequencing. This objective will also result in the development of a comprehensive pathogen collection that will be used in future research. Based on diagnostic results, the possible sources (seed, transplants, irrigation water, bucket water, rainwater, and soil) will be screened and tested using the same diagnostic tools.

Please contact Dr. Fulya Baysal-Gurel via at [email protected] or (931) 815-5143 if you would like to participate on this project by sending zinnia samples.