The long, elegant stems of a well-grown gentian are a sight to behold. The most prized are those with rich sapphire blue flowers, but cultivars with ruby red, royal purple or rosy pink flowers can command attention as well. The most commonly grown cultivars are those derived from Gentiana makinoi and G. triflora.

So, why isn’t everyone growing gentians? They generally don’t like summer heat, limiting prime production territory to the fields of coastal British Columbia, Washington State, Oregon, and California, or to hoophouses in Canada and northern United States. But cut flowers growers are an enterprising lot, and should consider trying them. You might find a jewel of a cut flower.

Seed germination is greatly increased by cold treatment. Store seed at 0F for at least two weeks; seed can be held for long periods at this temperature without decreasing germination rates. A longer storage time at 0F appears to enhance germination. 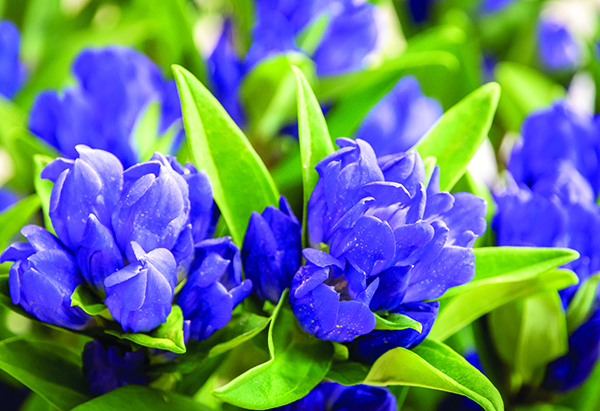 Plants should be produced in outdoor seed beds rather than flats or plug trays. Germination rates in trays can be the same as outdoor production, but seedling loss can be up to 100% for unidentified reasons.

The seed bed should be prepared at least a month before direct seeding. Well-drained loam or sandy soil is best, with a pH of 4.5 to 6.

Seeds are extremely fine and weeding after germination will damage seedlings, so seed beds that will produce minimal weed competition should be used. Amend soil with finished compost and a complete plant fertilizer, deeply cultivate, and shape bed. Clean beds of future weed pressure by preparing beds and watering, allowing existing weed seeds to germinate. After two weeks pull larger weeds and flame-weed the bed to eliminate smaller weeds. Avoid tilling or cultivating which will expose more latent seeds in the soil to germination conditions. Repeat just before sowing.

Prepare a smooth, clean, and uniform soil surface. Thoroughly water the bed to a uniform moisture level several inches deep. During calm air conditions, broadcast seed using a salt shaker filled with seed. Apply a thin dusting to the bed, then cover the seed with a very thin layer of quartz silica sand. The color contrast between the white sand and the soil will allow visual application of a cover only a few grains deep. Lightly mist the covered seed, and lightly compress the soil and sand cover with a flat soil tamper.

The moisture level of the soil should be maintained in a moist condition until the seeds germinate. A single lay-flat irrigation hose designed for sprinkling/misting and a connection to an irrigation timer set for 2 to 3 ten-minute waterings a day is an easy method to maintain a suitably moist condition.

Optimal germination and seedling survival are obtained with an early summer sowing (northern hemisphere) before a period of high ambient temperatures. This is approximately week 27, the first weeks of July, in northwest Oregon. Germination is in 7 to 14 days with 80 to 90% germination rates.

Seedlings are hand weeded as necessary. Loosened gentian seedlings should be immediately pressed back into the soil if disturbed by weeding. If seedling beds are properly prepared, only one or two weedings will be necessary before fall.

After the first killing frost, seedlings are covered for the winter with a half inch of aged horse bedding (50% sawdust [not cedar/redwood], 50% aged horse manure) and a floating row cover. Seedlings are ready for transplanting after the second or third season in a seedling bed.

If seedling plants are being grown in future production beds, thin plants the first season two or three times when seedlings have five to six leaves, to a final spacing of 1 x 2 inches. Thin the second season to a finished density of plants 6 x 6 inches.

Autumn sowings are productive but yield a lower germination rate and higher seedling loss to weedings. Sow the same as early summer, but overwinter the first year with a 4-inch mulch of seed-free straw and a floating row cover. Remove row cover in early spring and weed.

Gentiana is easily stunted or killed by transplanting or moving. It is one of the first of the hardy perennials to emerge from dormancy in early winter. The optimal time for transplanting or moving is after the plant has experienced its full cold dormancy. In northwestern Oregon, this is week 5 or 6, or approximately the second week of February. Plants that are lifted should be maintained in a cold, moist condition until replanting (32 to 38F cooler). Repeated warming and then cooling can have a stunting effect. Plants do not tolerate long storage in refrigerated coolers. Plants moved during this period seem to experience almost no transplant loss or damage.

To transplant during cold, wet soil conditions, it is optimal to prepare stale production beds the preceding fall for winter planting. Production beds prepared to be weed free like seedling beds above, mulched with a half inch of horse manure bedding, and then covered with solid polypropylene weed barrier, are best. When plants are ready to be planted the polypropylene weed barrier can be removed and seedlings transplanted in even the wet soil conditions of early winter without damaging soil structure and future plant growth.

Older plants can be lifted and divided during the same time period described for transplanting seedlings. Plants grow in compact clumps that can be lifted and divided. Optimal divisions will have at least several taproots one inch in diameter and several inches long, with a portion of the crown containing five or more shoots. Divided plants will begin commercial production one season after planting. Plants should not be stored for extended periods of time. Best results are lifting, dividing, and replanting without allowing any warming of the plant material. Divisions do not tolerate shipping where the plant material is allowed to warm beyond 40F.

Soil is prepared for production with a year of cover crops. Winter cover crop of vetch/field peas/annual rye is sowed in the fall, and in spring when in full flower, the crop is flailed and immediately tilled or preferably spaded in. Successive crops of buckwheat are sown for up to three crops during spring and summer. The first crop of buckwheat is left to grow until about 10% of the flowers have hard brown seeds. The cover crop is then flailed and immediately spaded in. This is repeated for a second crop. The final crop should be flailed and tilled before any seed has set in the flowers. Soil structure is improved, stable humus is increased, and weed pressure is greatly reduced by competition from the successive cover crops. Since Gentiana can remain in production for up to a decade, it is important to properly prepare production fields in a manner that establishes long-term fertility, proper soil structure and drainage, elimination of any hardpans, and weed competition.

After cover cropping, the production area is top dressed with a half to one inch of finished compost and a balanced plant fertilizer. It is then spaded or tilled for bed preparation. Soil should be worked for a uniform particle size with no large clods. Production beds are made with a 36-inch wide flat smooth bed top, sloping sides, and 8-10 inch loft. These beds can be shaped with a bedder. Beds should be separated by at least two-foot wide paths.

Beds should be irrigated and allowed to germinate any weeds, and then flame weeded. Beds are next mulched with a half to one inch composted horse bedding (50% sawdust/50% composted horse manure) or similar mulch. Bed tops are then covered with a woven polypropylene fabric top with a planting matrix of holes 12 inches on center (a row of three 6-inch square holes followed by a staggered row of two 6-inch holes). Paths are covered with a four-foot solid woven polypropylene covering, connecting bed top to bed top. Fabric is secured with 6-inch earth staples placed on the sides every 24 inches.

The production area is then completely covered with weed barrier fabric and interconnected to withstand wind lifting the fabric. The bed tops are covered with an additional solid 3-foot top which will be removed in February for direct planting. In this way, no weeds are allowed to gain a foothold over the winter, and with earthworm activity the soil remains friable and ready for planting in the winter. A production field prepared as described can be planted even in extremely wet weather without damaging soil structure.

Production beds are established with either direct-seeded plants, which are thinned to plants 6 to 12 inches on center, or two- to three-year old transplants, which are planted with crowns at soil level into the same spacing.

Plants are then grown in the covered beds for an additional season. In the fall of the first season, after plants are cut back, the weed barrier tops (with planting holes) are removed and the planting area can be top-dressed in compost and plant fertilizer, and mulched again for winter. This can be repeated for up to 10 years or more before plants will need to be lifted and divided.

Each spring plants should be supported with flower mesh netting (Tenax), three feet wide with 6-inch square holes. Net should be supported every 6 feet, with the first layer at 16 inches and the second layer installed at 24 inches and moved up as the stems grow to always have the netting within 16 inches of the top of the stems. Some cultivars can reach over five feet tall.

When plants reach 24 inches, thin the stems to about 20 stems per planting hole or 10 stems per plant. Thinner and shorter stems should have their tops removed, leaving the stem with lower leaves intact. This allows non-harvested stems to help nurture the producing stem and build reserves for the following season.

In cooler growing conditions, it may be necessary to use foliar feeding to eliminate any yellowing of the foliage caused by the plants’ inability to metabolize soil nutrients. Care should be exercised to avoid over-feeding, which will make plants attractive to whitefly and aphids.

Flowers mature slowly, even during periods of extended heat. Usually a single daily cut, early in the day, is sufficient to stay ahead of the flush.

Stem length ranges from 40 inches up to 60. Stems are cut to the length desired for shipping. The straight stiff stems are easy to bunch, fit in shipping boxes or buckets efficiently, and store best in floral solution at 38F. Stems can be brittle and snap during handling, so sleeves and double-banding the bunch can prevent losses. Flowers can be held in the cooler for up to a week after transport and still have a 14-day vase life. Postharvest solutions used for common specialty cut flowers like phlox, delphinium, stock, and veronica are suitable for Gentiana. An antibacterial solution with some sugars for flower food like Chrysal works well.

Depending on the cultivar, bloom times in western Oregon start about the third week of August and extend into October. Cultivars produce a single flush of flowers each season, extending over a two- to three-week period. Depending on its age, 20 to 50 stems are produced by each plant. As they age, the number of stems produced increases and the caliper size of the individual stems decreases. Beds can remain productive for up to twenty years, but older plants will require thinning of blooms in spring to maintain desirable stem caliper. If production plants are lifted and divided at the proper time of year, plantings can be maintained indefinitely.