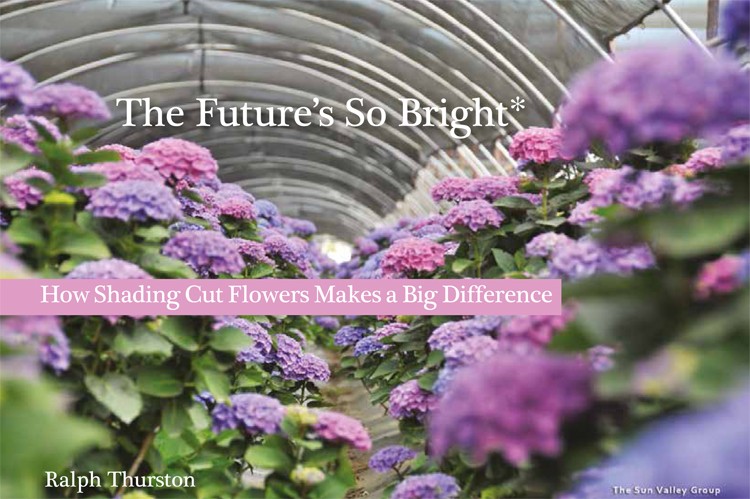 Much cut flower research concentrates on the effect of providing supplemental heat and light, via greenhouses, to crops in order to expand a species list, marketing window, or climate. Less work has been done on shading crops, but the same principles that apply to stretching seasons and the number and type of species grown with heat work equally well, if inversely, by cooling and shading cut flower species to improve their quality, lengthen their stems, or delay their bloom period.

Here at Bindweed we learned quite early that the cut flower species list shrinks considerably in our hot, intense light climate at a relatively high altitude of 4300 feet. As we perused the horticultural bibles and wrote down those species that tolerate our zone 5 temperatures, we found our list much shorter than those of farmers in warmer climates, and when we struck from that list those that preferred either shade or dappled shade, we found it shrinking further. To add insult to injury, even when we grew those remaining species we discovered many grew in our climate but didn’t reach a suitable height to use as a cut. It seems they just didn’t feel the need to stretch toward the sun, it already being closer to them than it would be in other climes.

More Profit in Darkness Than in Light

We quickly experimented with a shade structure, buying the same skeletal framework used for greenhouses but covering it with 50% shade cloth rather than plastic. We figured if our experiment failed, we could always convert the unit to a greenhouse. Fifteen years later, we wish we’d have erected three or four more, or even, in days of more magical thinking, covered the entire farm with shade. There’s more profit, it turns out, in darkness than in light—at least here.

There are four reasons to shade plants.

Shade, while it diminishes ambient temperature minimally, does lower leaf temperature a great deal. Without direct light on leaf surfaces, foliage transpiration lessens and you’ll never see leaves curl up as if wilted, as many plants do at temperatures over 90 degrees. This means the foliage can keep collecting energy rather than shutting down the plant completely, making for a healthier specimen over time. Plants never get the tired look they display in arid climates.

Shade also protects flowers prone to damage from hot, searing winds, lessening those effects, and it keeps the hot sun from browning flowers after rains or heavy dews, when strong light passing through water droplets acts as if coming through a magnifying glass. Some snowball viburnum or hydrangea growers use shade to protect their entire crop—one season under shade can pay for a structure if you weigh your success against the loss that might occur from a lost crop of browned or seared flowers.

More importantly for most cut flower growers, shade elongates stems, making them more marketable in most instances, though elongation often also weakens stems. Hence, it’s important to choose species whose stems don’t start out with minimal strength, like nigella or bupleurum, as shade will only exacerbate that tendency. Choose strong-stemmed plants like monkshood and phlox. Be prepared, too, to net many crops under shade, as the added height makes toppling more likely.

Shade can also delay bloom time considerably, so a crop that sells well when grown in the field can continue to be marketed by growing a later, shaded plot to follow it. We’ve grown phlox under shade that far surpassed the outdoor crop in bloom size and height, and it started to bloom almost immediately after the normal crop finished, giving us six weeks of sales instead of three.

We’ve tried a number of crops under shade but have narrowed our list due to space constraints, with profitability and ease of care determining our final choices. We devote much of the house to lysimachias, which grow poorly here in the high desert of Idaho. Lysimachia clethroides, gooseneck loosestrife (please don’t confuse it with purple loosestrife, a nasty invasive more properly known as Lythrum), barely reaches a foot tall in the field here, but under shade we get 24 to 30-inch stems and a widened harvest window. Being white and having a spiked flower gives gooseneck two unbeatable qualities that go along with a remarkable vase life.

Another lysimachia, the hard-to-find variety ‘Firecracker’ (if you know a source, please share with the flower farming community), likewise reaches only unmarketable heights when we attempt to grow it in the field, but under shade we get thirty-inch stems—and it’s one of those rare crops that can be cut as foliage all summer long, beginning in May, and then as flower later in the year (it also grows vigorously enough to get a second cutting if you’re so inclined). The foliage of ‘Firecracker’, reminiscent of Physocarpus ‘Diabolo’, makes it an easy sale, and its electric yellow blooms, set against that burgundy, create a stunning display. Designers sometimes just remove these blooms if yellow doesn’t fit with their palette. 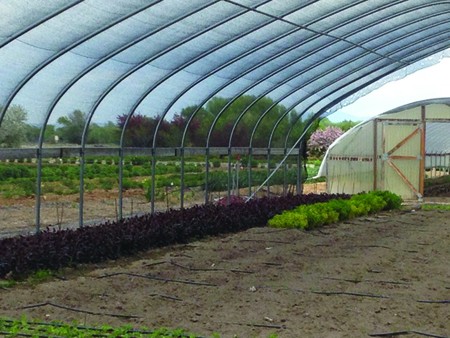 Lysimachia punctata ‘Golden Alexander’, a variegated form with yellow spikes, inevitably not only stays short but gets chlorotic when grown outdoors for us, but lessening the weather’s effects with shade makes it a marketable crop as both foliage and flower.

These lysimachias grow via rhizomes so fill in a bed relatively quickly and can be invasive, it’s said, in some climates. Our fifteen-year-old beds have yet to get out of control, however. Their rhizomatous nature allows them to be mulched to assist in weed control, another plus, and results in many stems—it wouldn’t be unusual to garner ten dollars a square foot from a lysimachia bed.

The Possibilities May Be Endless

Some species that prefer mild climates nonetheless accede to living under shade in harsh ones. We grow Icelandic poppies in the shade house to get longer stems, and to save them from the sun for a longer harvest period, and sweet peas, impossible to grow as a marketable crop outside here, suddenly become valuable when grown under shade. A favorite foliage, ‘Berggarten’ sage, when grown outdoors is barely tall enough to sell, but under shade gains six to twelve inches, adding to our sales. Campanula glomerata, tall enough to market only in years of mild weather, becomes predictably salable under shade. Lobelia, which sometimes blooms at eight inches when we grow it outdoors, under a shade cloth suddenly gets two feet tall, and many other crops we’ve not grown—lacking sufficient space—no doubt follow suit. Foxglove, hostas, heuchera, ligularia, gentian—the wish list is a long one! No doubt all those landscaping varieties listed as “compact” also quite possibly become cuts with the assistance of shade.

The only failure shade ever induced for us: a lisianthus crop, its harvest delayed into mid-August, met our high humidity nights of late summer. Its blooms succumbed to botrytis as we’ve never seen in any other instance in the field or greenhouse.

Even climates with plenty of cloudy days have a list of plants needing even more shade than already exists, so while arid, high-light areas no doubt gain the most from utilizing shade, likely even the mildest climate can benefit in some way from adding shade to the repertoire of growing techniques. If the threat of snow exists in your area, it’s best to either be prepared to remove shade cloth, or refrain from putting it up until that threat is gone, as snow doesn’t shed but collects and could easily collapse your structure. Those without snow threat can leave their shade on and likely need very minimal, inexpensive support systems to apply cloth, which breathes well and allows wind through without threat of damage. In any case, if you’ve been aching to grow something that needs more shade than your climate provides, give a shade structure a try.

*You know the next line.

Ralph Thurston, along with Jeriann Sabin, is owner of Bindweed Farm in Blackfoot, Idaho, as well as co-author of Deadhead: The Bindweed Way to Grow Flowers and All Pollen, No Petal: Behind the Flower Farming Dream. Contact him at [email protected]