Mention Italy, and people are likely imagine picturesque villages in the mountains, endless rows of olive trees and grapevines, and historic cities filled with ancient ruins and exquisite art.

What is less well known is that Italy is a major producer of cut flowers. Blessed with high light, a long growing season, and moderate Mediterranean temperatures, Italy grows a broad array of cut flowers and foliage. Italy is also a major producer of nursery plants, with almost half of ornamental farms (about 48%) dedicated exclusively to floral products, about 43% focused on nursery production, and the remaining 9% involved in both sectors. The two industries intersect in the production of woody cuts, which has been increasing.

Floriculture production occurs across Italy, but the most important cut flower regions are Liguria (representing about 22% of the national surface and the 30% of total production), followed by Tuscany, Lombardy,Campania, Sicily, Lazio, Veneto, Apulia, Piedmont, and Emilia Romagna, which together represent more than 90% of the production of cut flowers and potted plants. 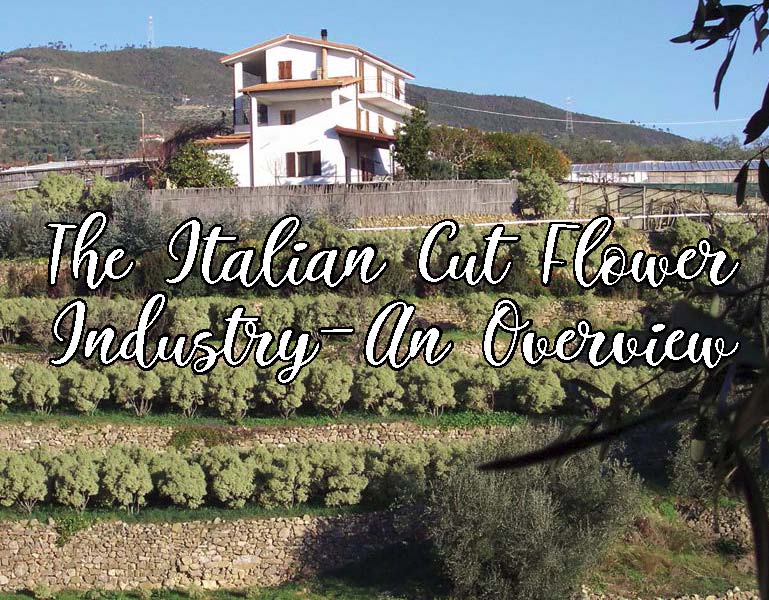 As a general trend, cut flower production in Italy has decreased due to competition from other countries, especially those in South America and Africa, where production costs are considerably lower. However, the woody cut sector has increased. 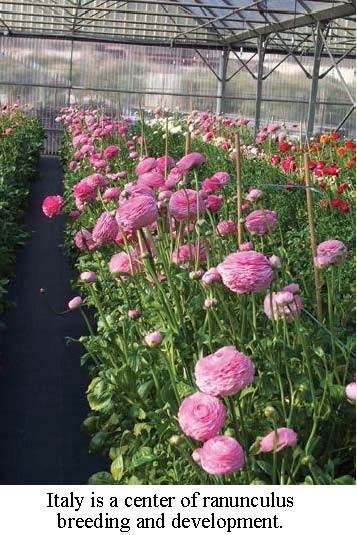 Data from the Italian stock exchange (2017) show that the most important Italian cut flower is ranunculus, produced mainly in Liguria and Campania. Formerly roses were the most important crop. Acacias from Liguria, carnations from Campania, and calla lilies and chrysanthemums from Tuscany are also noteworthy. The floriculture industry has been increasing in Apulia over the last few years where the main cut flower crops are gladiolus, lilium, carnation, rose, freesia, gerbera, iris, and chrysanthemum. Numerous species of woody cuts are grown, including green foliage like eucalyptus and ruscus, flowering species such as acacia, genista, and viburnum, and fruit-bearing foliage, such as rose hips and viburnum.Liguria, home to the Sanremo Flower Market, has traditionally been considered the center of high-quality floriculture production in the Mediterranean area, especially in terms of exports to northern Europe and the USA. 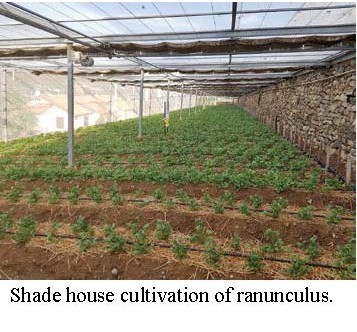 While Liguria is still important, there is strong competition from southern Italian regions and from importing countries. As a result, the number of Ligurian businesses involved in floriculture has declined.

Data collected (2018) at the Flower Market of Sanremo, Liguria Region show that ranunculus is the major cut flower.

Detailed data from the Census of Agriculture 2012 revealed that over the past decade, Italian floriculture has undergone profound changes, some similar to those happening elsewhere in Europe. Due to the economic crisis, and the occasional technical and managerial issues, many Italian companies have folded, with the cut flower sector suffering the most. Although the average farm acreage in Europe has increased [size of Dutch cut flowers companies has increased from 0.5 ha (1.2 acre) in 1980 to 1.2 ha (3.0 acres) in 2012] (Gimelli, 2012), in Italy farm size has remained constant.  In addition, the majority of cut flower farms usually have less than 1 ha (2.5 acres).

Due to poor profits, many small companies have returned to producing vegetables. However, several companies have become more specialized, especially in the cultivation of ranunculus, poppy, chrysanthemums, and even specialty rose production (in Sardinia, rose hips, scented roses, etc.). 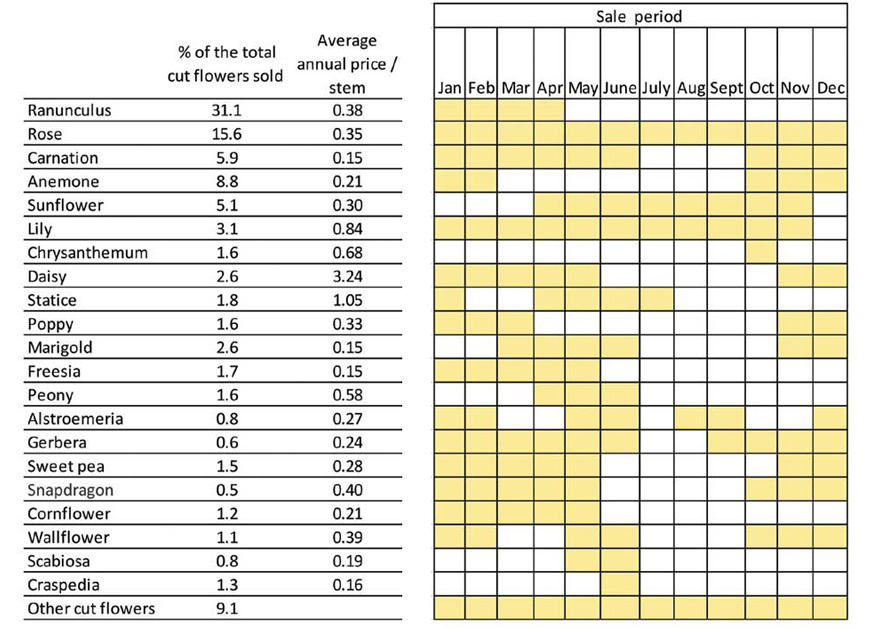 The management of Italian cut flower production farms is still largely based on the family, with about 90% of farms directly managed by owners and their family members.  However, fixed or seasonal wage labour is also used to help run the farms.

About 57% of the cultivation is in the open field, and about 43% under protective structures such as greenhouses, tunnels, shade covers, etc. Overall, 34% of the farms use only field production, 38% use only protected cultivation, and 28% use both. There has been a trend toward using more protective structures, indicating an evolution to a more efficient floriculture.

The majority of farms (about 90%) are equipped with irrigation systems, which are different according to the crop, and can be applied manually or with automatic control (irrigation by sliding and infiltration, submerged irrigation, rain sprinkling, micro-irrigation, etc.). Fertigation with or without electronic control is applied according to crops. In recent years, the general trend has been to cultivate cool-season species with low thermal requirements, so only an emergency heating system is usually used. When needed, gas or oil heating is generally used, although in recent years growers are using more renewable energy systems. The use of smart management (Internet of Things) as well the use of online purchase or sale and online catalog are increasing.

Italy is the fifth largest exporter of flowers in the world, after Holland, Colombia, Ecuador, and Kenya. Traditionally, the flowers are sold in Europe, with the Netherlands being the most important market for cut flowers. The production of cut foliage is very important as well since it can be done without the use of greenhouses and heating, and foliage is in demand by consumers.

While demand from foreign markets has recovered in the past two years, the domestic front remains weak. The per-capita Italian consumption of cut flowers and ornamental foliage is estimated at some 29 € (approximately 35 USD) per year (AIPH, 2014). This per-capita consumption is quite stable after a sharp decline during the economic crisis. The major reasons Italians buy flowers is for gifts (48%), followed by home decoration (22%), weddings (13%), cemetery (12%), and others (5%). Although the rose—of every species and color—is by far the most important in the sales of fresh flowers (more than 45%), Italians are fond of tulips, gerberas, lilies, and orchids, without forgetting the traditional carnations and ranunculus, of course. The chrysanthemum is most important for funerals, although this flower is a symbol of joy in many parts of the world. According to various studies in the sector, the largest number of flowers is sold in the South—particularly in Sicily—with approximately 29% of sales, followed by the Northwest, Northeast, and Center. A little over 40% of purchases are made by people over 55, including 22% by retirees.

In Italy, about 65% of the total sales of cut flowers and ornamental foliage are sold via florists and another 25% by street vendors. Supermarket sales have not been very successful in Italy and account for only 3-4% of the total sales. The remainder is sold through various outlets such as garden centers or directly from growers.

As with the United States and Canada, the Italian cut flower industry is increasingly focused on specialty cut flowers and foliage, especially those from woody trees and shrubs. Imported flowers have increased, resulting in more competition with local producers. However, the cut flower industry is still an important sector in Italy.  The marketing chain is adapting by selling more flowers through garden centers and direct to the customer.

The majority of farms are small and family owned/operated—another similarity to the United States and Canada. Much of the production is in the field, but increasingly producers are using greenhouses and other protective structures.