Do you own a shovel? Sure you do. Do you love using that shovel? Maybe? Sometimes? No thanks? Yeah, me too. I know that a shovel is essential and it’s a tool that we use on our farm almost every day. But it’s not my favorite way to get things done. Sure, sometimes it’s the right tool, and sometimes it makes sense, but sometimes there are ways to make things happen without quite so much work.

This has become more evident over the years as we have grown from a half acre to ten, as we grew from a crew of two to one of nine-plus, and, maybe most of all, as we’ve moved from young twenty-somethings to more—ahem—mature farmers. Turns out that old adage of work smarter, not harder is real and applicable to farming…who knew? 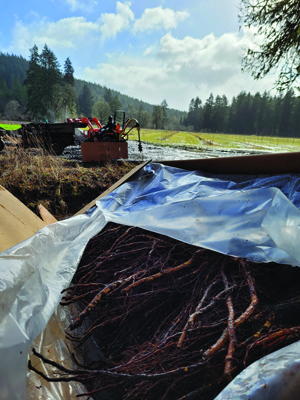 Last fall I sat down to do my orders, while balancing kids in online school, a 2-year-old, a full crew, and trying to keep us all in clean socks. To say I was distracted is an understatement. I frantically tried to put together all the orders I knew that I’d need, sending them out and promptly moving to the next thing on my list. Fast forward to January when shipping confirmations and boxes started to show up left and right, things that I had totally forgotten were coming. It really wasn’t that big a deal, and we were keeping up pretty well. This was the first winter that we kept crew members on through the lean months of December and January, and it was great to have projects to keep them busy. All was rolling well until a confirmation showed up reminding me that I had ordered almost 1000 more bare-root roses, and that they’d be here in a few weeks. Oops.

And then it was a week out and one of our three winter employees went out sick—for three weeks. So we were left with two crew members, and the two of us, and 1000 bare-root roses to get in the ground. Enter a little farmer panic. Not to worry, though: Mr. Aaron found a way to get those roses in the ground. He went out and bought an auger for our tractor. I was thoroughly unimpressed. It seemed like a huge tool that may or may not work. The first run did not convince me. The ground was wet and our learning curve was steep, resulting in deep ruts in the pathways and ruined weed mat. However, with a little finesse and a few hundred more holes, we got the swing of it and were able to plant all 1000 of those roses in about a week. Not only was it far less backbreaking than digging all those holes with my favorite shovel, but the holes that the auger dug spit out fine soil as opposed to the clods that we end up with when we’re using shovels, making planting a breeze.

In short, I was sold. So much so that I bought another auger, this one gas powered and hand operated, for our dahlia planting. We have always planted our dahlias by hand. We’ve talked over the years about trying to figure out a way to automate or at least mechanize parts of the process, but have been overwhelmed by the infrastructure that we see elsewhere, not to mention the cost of equipment. I’m happy to report that we’ve found our labor on dahlias to be greatly reduced by the addition of this simple $300 auger. Now, instead of everyone digging holes, just one person runs the auger and everyone else streamlines the process by fertilizing, laying tubers, planting and mulching. And boom, we’ve got five rows planted in the time it would have taken us to plant one last year. Shaving off the hours of labor, not to mention the wear and tear on the crew, has already paid for the piece of equipment. What would take three people an hour to dig and prep took less than 20 minutes with the auger. It made me feel a bit silly for balking at the upfront cost, when I look back and see how the benefits so far outweighed it.

How had we not discovered this earlier? What else could we use this for? What else am I breaking my back over, when there is a far smarter way? I’m always on the lookout for ways to work smarter, not harder and I encourage you to do the same. Each time we make the leap to try something new (to us) with success it gives us more confidence in our capabilities and makes us more assured that we can do this. Sometimes it doesn’t work, but is that a failure? Absolutely not. Trying, regardless of outcome, is about learning and adjusting to find the best fit for you. What works for me may or may not work for you, and vice versa, but how will we know unless we try.

Here’s hoping that we never stop trying new things and continuing to develop ourselves, and our farms! Happy growing!