Entomopathogenic Nematodes Were Effective against Western Flower Thrips on Chrysanthemum Plants, But Not in Gerbera Flowers, under Greenhouse Conditions

This report is funded by the ASCFG Research Foundation.
Raymond A. Cloyd and Nathan J. Herrick, Department of Entomology, Kansas State University

Western flower thrips, Frankliniella occidentalis, is a major insect pest of cut flower crops that can cause direct economic damage. Producers are looking for alternative strategies to manage western flower thrips because populations have developed resistance to many insecticides. Consequently, some producers are using entomopathogenic nematodes, although most information on how well they work is anecdotal. Therefore, we conducted a research project, funded by the Association of Specialty Cut Flower Growers Research Foundation, to determine the efficacy of the entomopathogenic nematode Steinernema feltiae against western flower thrips in gerbera, Gerbera jamesonii, flowers and on chrysanthemum, Chrysanthemum × grandiflorum, plants under greenhouse conditions.

In the first experiment, sixty gerbera daisy cut flower stems were placed into glass vials containing tap water. There was one cut flower per glass vial. All vials (n=60) were placed on a wire-mesh bench in a greenhouse with an open frame composed of PVC piping, which held a 50% black knit shade cloth placed on top. The experiment was set up as a completely randomized design. Each cut flower was artificially infested with 10 to 15 western flower thrips adults, obtained from our laboratory colony, and allowed to acclimate in the cut flowers for 24 hours. The glass vials were refilled as needed with tap water. The treatments were prepared in 32 fluid ounces (946 milliliters) of tap water and applied to the flowers using 32-ounce spray bottles. Each cut flower received 0.85 fluid ounces (25 milliliters) of spray solution, which thoroughly saturated the flower surface and allowed the solution to penetrate the disc floret portion of the flowers. There were six treatments, which are presented in Table 1, with five replications per treatment.Thirty gerbera cut flowers were harvested four days after the first application, and the remaining 30 cut flowers were harvested four days after the second application. For both evaluations, cut flowers were placed into plastic Petri dishes with lids and the number of live, dead, and total number of western flower thrips adults per cut flower were counted. Percent mortality associated with each treatment was calculated by dividing the number of dead western flower thrips adults by the total number recovered per cut flower or replicate. Percent mortality estimates for all the data were subject to analysis with treatment as the main effect.

Percent western flower thrips adult mortality was not significantly different (P>0.05) across the treatments associated with one application of the entomopathogenic nematodes. There were no statistical comparisons made affiliated with two applications of the treatments because of the low recovery of western flower thrips adults, which may have been due to the cut flowers being excessively moist.

The second greenhouse experiment involved using 35 clear plastic observation cages [18 x 18 x 24 inches (length x width x height)] arranged in rows on top of two wire-mesh greenhouse benches. Each cage had a lid with a hole and two holes on opposing sides covered with thrips screening to allow for ventilation and prevent western flower thrips adults from escaping.
Thirty-five chrysanthemum ‘Manhattan’ young plants were transplanted into 6-inch diameter containers with a growing medium composed of 75 to 85% coarse sphagnum peat moss, perlite, vermiculite, and a wetting agent. Plants were grown for 44 days before they were infested with western flower thrips adults.

Chrysanthemum plants were randomly placed among the 35 clear plastic observation cages. Plants were watered as needed with 6.7 to 10.1 fluid ounces (200 to 300 milliliters) of tap water. Western flower thrips adults were released onto each of the 35 plants with 10 to 15 per plant. These were allowed to acclimate on the plants for three days. The experiment was set up as a completely randomized design. There were seven treatments, which are presented in Table 1, with five replications per treatment.

The chrysanthemum plants received 2.1 fluid ounces (60 milliliters) of spray solution using 32-ounce plastic spray bottles. Seven days after each application, they were inspected to assess the level of thrips feeding damage based on the following foliar damage ranking scale:

Table 1. Treatments and rates used for experiments one and two associated with the effects of the entomopathogenic nematode, Steinernema feltiae on western flower thrips, Frankliniella occidentalis, adults in gerbera flowers (experiment one) and on chrysanthemum plants (experiment two). 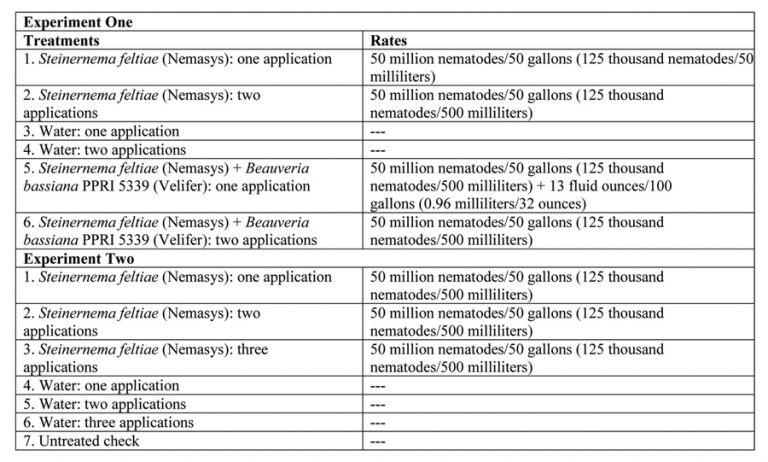 Figure 1. Mean (± SEM) number of western flower thrips, Frankliniella occidentalis, adults recovered from growing medium associated with each of the six treatments. Means followed by the same letter are not significantly different (P>0.05) as determined by Tukey’s honestly significance difference test. The vertical bars represent the standard error of the mean (SEM). 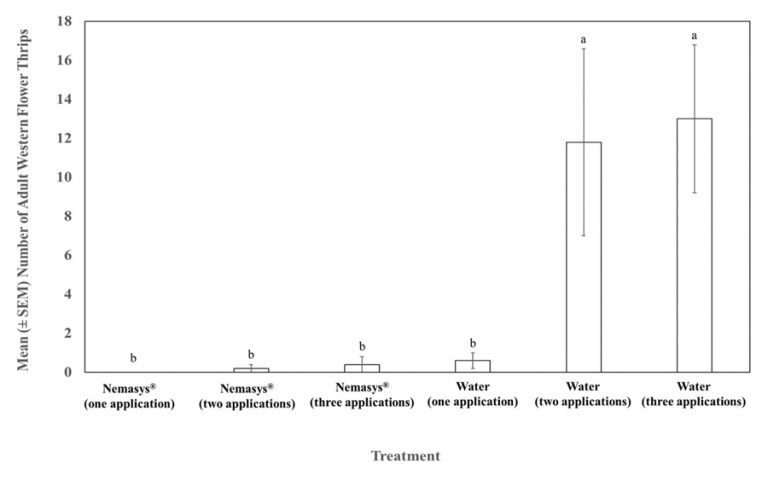