Seeing Beyond the Weeds

That saying, “Teamwork makes the dream work!” is not just a line blazed on an annoying positivity poster. It’s legit the only way to make the dream of a functioning farm work. I denied this hard truth for a long time. I hate managing people. I specifically got into farming because I was tired of office politics, team meetings, and group projects.  I spent three seasons trying to convince myself that I could do it all on my own if I just pushed a little harder. Turns out there really are only 24 hours in a day! And there was no way to grow my business if I wasn’t willing or able to hire a team.

It seems so overwhelming, the prospect of bringing on employees to your small business. First, can you afford to pay them? Second, how do you even go about hiring someone? Third, once someone is hired, how do you train them? Fourth, how to keep them working efficiently through the daily grind? And lastly, how to get them to stick around for more than a few months? Yep. Those conundrums are exactly why so many of us just decide to buckle down and try to squeeze a little more blood, sweat, and tears out of our own exhausted bodies.

But here’s the thing. Your farm and business are SUPER vulnerable without employees. You get injured or sick, what happens? Really think about that. And you really can’t expand your business much at all without helping hands. I believe that the sooner you create a team for your farm and business, the easier it will be. Too often people wait until they are threadbare and overextended so they have no capacity to put the work into creating an effective hiring and team management process. I’m speaking from painful experience here.

I spent years being a bad boss. I could tell you a handful of horror stories about how I made employees cry and quit on the spot. I was so tired and disorganized myself that I didn’t have the capacity to set them up for success. Because that’s the thing: no employee, however passionate or experienced or driven, can do a good job if the boss doesn’t lay the foundation for them.

After failing miserably for longer than I care to admit, here are the building blocks that have helped me develop a high-functioning team that returns season after season.

1) Take the time to hire with care. Set aside time to really focus on the interview process. Make it a working interview at least an hour long where the applicant gets their hands dirty while answering your (prepared in advance) questions. Watch to see if they move with determination and if they can talk and work at the same time. You can train anyone to do most any task on the farm, but you can’t fix ingrained traits like listless walking or chattering with idle hands. And, perhaps most critical to making good hiring decisions: call their references!

2) Take the time to train with care. Trust me, I know how hard it is to slow down to a new hire’s pace and force yourself to stick beside them while they get the hang of a new task. It’s painful. But if you don’t do it now, you will just be losing ground all season long as they develop bad habits and do a subpar job. Things that are so obvious and simple to you are new and overwhelming to them. 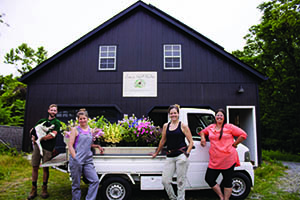 Don’t just say, “Fill up a bucket and go harvest the snapdragons.” Show them which bucket to fill up. Then show them exactly how much water to put in the bucket. Then walk them over to the snapdragons and do a complete harvest lesson that includes proper stage of harvest, how much of the stem to strip of leaves, how to hold harvested stems in their hand, and even how to put a rubber band around the bunch. Even if they worked for another farm before, still show them all of this minutiae because there’s a very good chance their last farm boss didn’t take the time to train them well.

3) Take the time to explain the big picture. One of those times when I made a former crew member cry, she bawled at me that she wished she knew what the big picture was instead of just being told to go weed every day. At the time I bristled in defense and thought she was being nosy or something. Why did she need to know my entire grand plan for a season or for my farm’s lifespan? Took me a few years to finally come around and realize how powerful that big picture is for employees. Just like loyal customers who want to know more about you and hear your story, employees want to know more than just the mundane tasks assigned to them day to day. Sharing your vision and hopes is the difference between having laborers and having a team. The team buys into your mission and takes it on as their own. Together you work to piece that big picture together. You will no longer feel alone. They will feel empowered and invested.

4) Take the time to explain time. All right, so this one single-handedly lost me a couple decent employees before I got my act together. When assigning tasks, don’t just say, “Go weed the yarrow.” and walk away. Instead, tell them the amount of time you anticipate it will take them to weed the yarrow. Repeatedly in the past, I would get really frustrated and eventually lose my cool with employees when they were taking way too long to do what I thought would be a quick task. One day, through tears (sensing a theme here?), an intern told me she had no idea how long weeding the yarrow was supposed to take her so how could I be so upset that she took so long to do it. Good point! Since then, I always give an anticipated time frame for each task on the team’s workflow for the day.

5) Take time to write it down. For several seasons I would just rattle off tasks to employees as they came up to me and asked, “What’s next?” throughout the day. Do you do this, too? It sort of worked, but there were so many flaws to that “system” (or lack thereof). Often they would misunderstand me and then feel sheepish about coming back to me for clarification. Or there would be a “whisper down the lane” thing amongst the crew and the task would get done incorrectly because it got miscommunicated. I was typically rushing around and not thinking clearly so I would blurt out the first thing that came to mind, which wasn’t the actual thing that really needed done. Also, it was horribly inefficient to have them trotting back to me constantly across a 5-acre farm to get their next assignment. To top it off, I was unable to focus on my own tasks so at the end of the day I didn’t get my personal to-do list done at all.

For the 2018 season I adopted a new system, which was to take the time each Sunday to write out a very long and detailed team email that got sent to everyone so they all had the same exact information in writing. The email was written after I had taken a farm walk with notebook in hand so I could jot down all the tasks that appeared to need doing in the coming week, and then I organized them into what seemed like the most efficient workflow. Those emails took a couple hours to write, but they helped the team function much more effectively. No one had to come ask me “What’s next?” anymore. It also gave the crew a real hard look at exactly how much work needed doing that week, which seemed to motivate them.

But the weakness of the email was that it was stagnant and got sent on Sunday and lord knows a lot can change on a farm between Sunday and Wednesday! The concept was good but the vehicle for communication was lacking. This season, after reading Daniel Mays’ book, I adopted a new method that I absolutely love! I now have a Google Doc (spreadsheet) that everyone on the crew always has access to on their phones or on the tablet I keep in the barn. I call it our “digital whiteboard” since it’s just like a big ol’ whiteboard, but no one has to suffer through trying to read my wretched handwriting! I can make real-time changes to it and the information is in a format that is easy to understand. Usually on my lunch break, I’ll open up my computer and do a two-minute update so the afternoon flows smoothly. My crew is loving it, and their efficiency is through the roof! I put my own tasks on there too, so they can see exactly how complex running the business is and how important and helpful it is for me that they are handling the weeding and harvesting so I can focus on marketing, client relations, updating the online shop, bookkeeping, designing weddings, ordering supplies, etc.

My favorite part about the digital whiteboard is that it’s also a system for recordkeeping. I make a separate tab for each new week so the previous weeks can all still be easily referenced, which is handy if I need to know when the last time we sprayed fish emulsion on the dahlias was or when those zinnias went in the ground. And it means each season that database of recorded tasks will just get deeper and broader, so I don’t have to the reinvent the wheel. I anticipate some day handing off this digital file to a farm manager, which would make that transition vastly easier when he or she can refer back to several seasons’ worth of weekly tasks and get a solid feel for what’s likely going to need doing in, say, Week 18 each year.

There’s so much more to managing an effective crew than what I can write here in this article, but hopefully these five touchstones will give you more confidence in your own hiring and managing efforts. It takes time to learn how to be a good boss. Don’t be hard on yourself when you feel like you fail. But also don’t be apathetic about it. Seek out training and best practices to emulate so you can be a little bit better at your job too each season. And once you’ve got that team humming along, you’ll wonder how you ever did all this by yourself!

If you’d like to hear more discussion on team building and management, check out the No-Till Flowers Podcast for conversations I’ve had with other ASCFG members like Laura Beth Resnick and Joe Schmitt about their crews.

Back
Go to Top