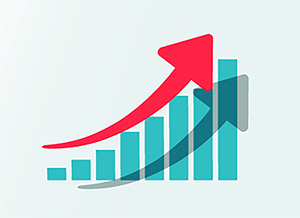 The U.S. floriculture industry’s sales grew nearly 16 percent from 2019 to 2021, hitting the $6 billion mark for the first time, according to the latest data from the U.S. Department of Agriculture’s National Agricultural Statistics Service (NASS).

The 2021 Floriculture Crops Survey, released May 25, reported $6.4 billion in floriculture sales, up from $5.5 billion in 2019, when the Census of Horticultural Specialties—conducted every five years—last collected data from all 50 states.

The survey is conducted annually, and the 2021 survey included for the first time expanded data from all 50 states. A more robust, comprehensive survey is something the Society of American Florists and its members have pushed for years to achieve. In previous years, the survey has only collected data from the top producing states. Starting with the 2021 survey, operators with sales of more than $10,000 were surveyed in 28 states, and that state data is presented individually. The data from operators with more than $100,000 in sales in the remaining 22 states is grouped together. The 2021 survey also included more than 30 new crops.

The improved survey has allowed for a better look at the scope of domestic floriculture production and sales. Marvin Miller, Ph.D., AAF, of Ball Horticulture Company, who began working closely with SAF and USDA/NASS nearly four decades ago to reinstate, and later improve, the survey, noted that Ball has long suspected the annual bedding and garden plants category was much larger than what previous surveys found. The 2021 survey confirms that suspicion, he says.  “We’ve been underrepresenting the annual and perennial bedding [production] significantly,” Miller says, noting that in 2021 the category accounted for 60 percent of floriculture production, compared to 53 percent in 2020, when only 17 states were surveyed.

Other key takeaways from the 2021 survey:

Florida and California were the top two states in sales, which combined, account for nearly one-third of all sales in the U.S. The survey also found that a record 18 states had more than $100,000 in sales.
The top five states in sales were: