I have been farming since before I had kids. Back then I had dreams of strapping my babies to my back, continuing work as usual, and showing them the many wonders of nature, observed through the lens of farming that lured me to this lifestyle to begin with. That was a long time ago, and many of those idealistic dreams have long been checked by reality as I found what an enormous challenge it was to raise babies and manage a farm business, not to mention the many concessions every parent makes as the realities of parenting collide with the ideals we begin with.

Since having kids, I have always had the dream of instilling in my children the strong work ethic my partner and I have brought to our farming careers. On the flip side, we are total workaholics, and I didn’t necessarily want my kids to have to take that on. I wanted to let them be themselves, knowing full well they wouldn’t necessarily (or even likely) want to be farmers.

Trying to balance how our kids have helped on the farm over the years has been a negotiation in what we want them to learn, how motivated they were to do the task, and how hard we wanted to work to get them to work. While our kids have always helped at the farm in some capacity, we also always had a crew of employees, so our work output was not really dependent on their participation. I think the public’s (i.e. our customers’) perception of how much are kids work on the farm far exceeds the reality. This may be because we have always expected the kids to help at the farmers’ market—originally just to look cute/help with sales, but eventually helping to load the truck, running the registers, and practicing their customer service skills. 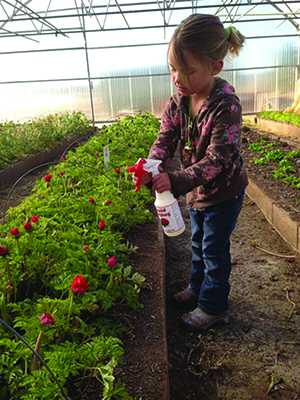 Outside of the market, though, the amount we have expected them to work has also always been kind of amorphous. Each child had their areas where they excelled and we let them do what suited them best; one child is great at office work, another loves driving vehicles and auto mechanics, and another excelled in the wash-pack room. There was the work we expected them to do just because they were part of the family (unpaid), and the work that contributed to the business (paid, but only if they were doing it well), and the times where we were desperately short-handed and we really forced them to help. We have had to find the jobs that suited each one’s interest, and their willingness to work waxes and wanes with their age, maturity, and other interests and commitments.

This was the first summer Cooper, our oldest (15), was motivated enough by the prospects of a paycheck to commit to regular working hours and getting on the payroll (they were all given the opportunity, but only one accepted). I was a bit apprehensive as my oldest has always been my laziest child, shirking work and chores in any way they could, and creating elaborate rationales for why. I just didn’t know how it would go. Negotiating the emotions of a 15-year-old is hard and I didn’t want to complicate things by also being the boss. But it ended up being a really great experience for us both and I just wanted to share it with you all. I am not an expert in this field, I feel like I am on the very front end of this learning curve. But I wanted to open up a conversation about it. And in thinking about writing this article it did just that. I reached out to a few friends and mentors to see how hiring their own kids went for them.

Cooper, given some options, elected to help on the flower crew, which means we were side by side this summer. It gave me the chance to make sure their work was up to par, but it meant we were in pretty close quarters. There was a bit of a switch that flipped when they came to work on the clock, however. They rarely complained or argued and just did what I asked of them, because, you know, it’s a job. They learned to negotiate with the Spanish-speaking crew members even when I wasn’t around to translate. They took a new interest in flowers, processes, and efficiency, and overall had a good attitude. I can’t say every day was perfect or that they were my absolute best employee, but they definitely weren’t the worst.

At the end of the summer there were a few things that felt like big wins. First, an appreciation for how hard we work to support our family and continue to farm. Cooper lobbied for half days of work, which I agreed to. At the end of the summer, they said, “Okay, so I work 4 hours a day and I am pretty tired. Then the rest of the crew works 8- to 9-hour days. And you and Dad work like an extra 4 hours after everyone goes home. I never realized how hard you work.” Well, here is a priceless bit of insight that I will treasure forever. Second, the value of the money you earn. At the beginning of the summer Cooper was dead set on wanting a new cell phone, an expensive one. They wanted to buy it on my phone plan, paying it off over 12 or 24 months or whatever the deal is offered so they could get it immediately. I was adamant that they work first, buy what they want after. Many arguments ensued, but I held my ground. I did not want to be on the hook if the job didn’t work out. By the end of the summer, Cooper bought a cheaper used phone outright, and saved a bunch of money for later, and was so very happy about their decision.

When I asked Cooper what the pros and cons of working for their parents were they said, “The positive thing was easy access to the job; it would be have been hard to get to another job without a car, living where we do. And making my own money made me feel really empowered. The con was working for my parents; you don’t get to leave your relationship out if it—they are still your parents and it can affect how they treat you.” But all in all we both agreed it was really positive. And I can say that I have seen a huge change in how they work at the farmers’ market too. They have a different presence and command, We are not constantly calling them back to work when they wander off—they take it seriously. I look forward to seeing how this relationship will continue to change over time and how my other kids will decide to take on this role, if at all.

Pamela Arnosky, of Arnosky Family Farm, longtime ASCFG member, has a lot of experience with her kids working on the farm. Her four kids were mostly all homeschooled and started working for them at a young age. She always paid them and never made them weed (too demoralizing, according to her, but I have made my kids weed a lot). They started by stickering sleeves and running flowers to buckets. At $1 for every bucket filled, they got really good at keeping track and always had a time card to get paid/keep track of piece work. From seeding weekly trays of sunflowers after school to starting their own successful farm ventures, her kids learned lots of valuable life lessons through farm employment. Now all grown up with families of their own (and none of them farmers), she credits many of their successes in life to skills they learned working on the farm, from systems creation to managing each other and learning leadership. She also had to let them do the job their own way at times, because sometimes it’s just not worth the fight. They earned enough working summers to pay for their own summer camp and brought their friends home from college to work at the farm. She said by the time the kids were in high school they could manage the farm for a week so she and Frank could get away. For me, this is something to aspire to.

Erin McMullen of Raindrop Farm (current ASCFG Board member) had her 15-year-old working at the farm officially for the first time this summer. Similar to our situation, her kids have helped her more informally over the years, especially helping at farmers’ market and babysitting their little sister. Her and her husband’s major motivation in having their kids work on the farm is to help instill a good work ethic, one they often see lacking in younger folks they hire onto their crew. A friend of their son was also hired onto the crew this summer and Erin says this was a major motivating factor for their son in getting him to work on time and staying on task (I mean, all 15-year-olds want to look good in front of their friends, right?). Another positive aspect Erin sees is the relationships her kids build with the adult crew members, and knows this ability to interact well with adults will carry over to future workplace environments. For Raindrop Farm labor is really hard to find, so “homegrown” labor is a good option, plus her kids already know their systems and it was easy to layer them into the workflow. She knows that her kids may not take her as seriously as they might another boss, but overall the experience felt like a really good one. Living rurally, it’s not easy for her kids to access their friends and their social needs, and her son was very motivated to save up for a car.

Legalities of hiring your kids

This information is gleaned from my own knowledge and what I have learned from talking to others, plus some Googling. Please don’t take any of it for fact. Look into the legalities yourself and talk to your tax advisor!

In the U.S., on a family-owned farm, children of any age can work under the supervision of their parents, according to the Fair Labor Standards Act. For younger workers who are not family members, the rules are all over the map and vary a lot from state to state (age they can start work, and how many hours they can work in and out of the school season) so check them out to make sure you aren’t breaking any labor laws. To make sure you are compliant with the IRS when hiring your own child for your business, you must choose a job that is appropriate for their age, pay them fairly, and keep track of the hours they work and the type of job they do for you.

Generally speaking, your children can work for you, earn up to the standard minimum deduction and pay almost nothing in taxes, while still being a business write-off for the farm. You will likely still need to have them fill out a W-4 form and withhold federal taxes, but all that could all be reimbursed depending on how much they make. So having your kids work for you can be a financial gain.

Over the last few years finding, training, and keeping labor has been a huge obstacle for us. So, if a little homegrown labor helps alleviate some of the pressure—not to mention checks off some of your parenting goals—it’s definitely worth a try. And if your kids are not interested in working at the farm or you don’t want them to, I think that is also a very justifiable way to go.