This report is a little late in coming, because from my perspective I considered it an utter failure, but learning often comes in the failing!

Here in eastern Nebraska, zone 5, we have grown eucalyptus as an annual for many years. I had heard of some successes with overwintering eucalyptus in zone 6 so thought I’d try to push it a bit and see if we could get any to overwinter here.
In 2020 we were awarded an ASCFG Grower Grant to help pay for the costs of a small trial. We worked with Ed Coughlin from Southern Eucs to pick out some of the hardiest varieties he thought might stand the best chance of surviving here. We originally planned to plant half of each variety in our hoophouse, but because of some soil issues in them we decided not to risk it.

In May we planted the varieties ‘Funky Monkey’, ‘Cab Sav’, ‘Grace’, and ‘Sheila’ in our outside beds. They all grew beautifully that summer and come fall we trimmed them back, mulched heavily with leaves, constructed a low tunnel over the bed, and covered it with plastic. We did get some incredibly low temps that winter with a low of minus 30 at one point, which is pretty much unheard of for us. We also had great snow cover most of the winter, which is also not normal for us, and we hoped that would help insulate them from the cold.

Unfortunately, we did not have a single plant survive.

In 2021 we tried planting some of our favorite variety, ‘Silver Drop’, in our high tunnel since we were pretty sure that variety would not be available in 2022. We also planted some ‘Baby Blue’ and ‘Willow’ both in the tunnel and outside. In the fall we mulched with leaves and covered both the outside plants and those in the hoophouse, some with plastic and some with frost fabric.

This spring (2022), we anxiously awaited warmer weather in hopes that some would survive since we’d had a much milder winter. As I write this, the first of June, I have seen a few plants, both in the tunnel and outside, that have survived. I’ve not done an actual count but I’m guessing 5% or fewer of the plants show any signs of life, and honestly they are no bigger at this point than the new transplants that we’ve put in this spring. And there doesn’t appear to be much difference between those in the tunnel and those outside. It also does not appear to be one variety over another that survived better—just a variety of scattered ones made it.

At this point I’m going to be content to grow our eucalyptus as an annual and just be perennially jealous of those who can get it to overwinter! 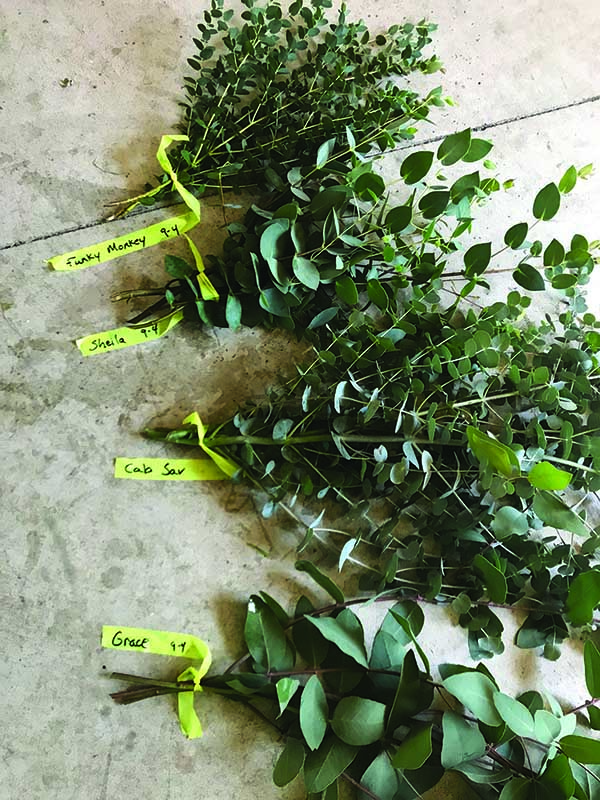